Khadas has unveiled a “Khadas Vim3” SBC that runs Linux on an Amlogic S922X with 4x -A73 and 2x -A53 cores, with a future model featuring a neural processor. You get up to 4 GB RAM and 32GB eMMC plus expansion via 40-pin GPIO, PCIe, and M.2 with NVMe.

Shenzhen Wesion’s Khadas project will soon launch the second Linux hacker board to offer Amlogic’s hexa-core S922X after Hardkernel’s Odroid-N2. The Khadas Vim3, which follows the quad-core Amlogic S905X based Khadas Vim1 and octa-core Amlogic S912 Khadas Vim2, is “coming soon” with high-end features like NVMe storage and a combo interface that can be used for either PCIe or USB 3.0. (UPDATE: The Vim3 is now available.) 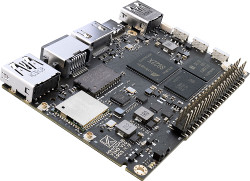 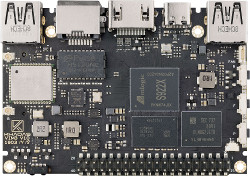 Khadas Vim3
(click images to enlarge)
Despite having fewer CPU cores, the Khadas Vim3’s Amlogic S922X is much more powerful than the Vim2’s octa-core, Cortex-A53 S912, as well as the Rockchip RK3399 (2x -A72 and 4x -A53). According to Hardkernel benchmarks using the Odroid-N2, this 12 nm-fabricated SoC with 4x 1.8 GHz Cortex-A73 cores and 2x 1.9 GHz -A53 cores delivers about 20 percent faster CPU performance than the widely deployed RK3399. It also offers a Cortex-M4 chip and an advanced Arm Mali-G52 GPU equipped with 6x 846MHz EEs.

The specs below are only for the first of three Khadas Vim3 models. Judging from the mention of “next generation, deep-neural-network applications, at 2.5 TOPS,” at least one of the other Vim3 models will feature a processor with an neural processing unit (NPU), which is unavailable on the S922X. As noted by the CNXSoft story that alerted us to the SBC, this is likely the upcoming Amlogic S922D, which appears to be the same as the S922X except for the addition of an A311 neural processor.

The Khadas Vim3 has the same, somewhat Raspberry Pi-like 82 mm x 58 mm x 11.5 mm footprint and layout as the earlier Vim boards, and similarly offers a 40-pin GPIO. The Vim3 will likely continue the Khadas tradition of shipping with schematics and other open source files, as well as supporting Linux and Android. All the Khadas project is saying about OS support now is that there will be a Felix Script app for “one-click” builds of Linux distributions.

A few key specs are still up in the air, such as whether it will include a microSD slot or whether pogo pads will be included. The precise nature of the pins supported on the M.2 socket is also uncertain, and there is also a question about the dual USB 2.0 host ports, suggesting the possibility that one or more might jump to 3.0. 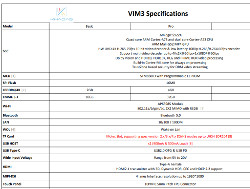 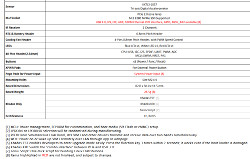 Preliminary specs for the Khadas Vim3
(click images to enlarge)

The Vim 3 follows the Vim2 in offering a GbE port with Wake-on-LAN, as well as 802.11ac and Bluetooth 5.0. Other similar features include the RTC, IR receiver, LEDs, and 2x USB 2.0 ports.

Like the Vim2, the Vim3 offers a USB Type-C port with power input, but it now adds support for wide-range, 5-20 V DC support, which Khadas says is useful for running power-hungry devices such as a mic array and speakers. An STMicro STM8S003 based power management chip includes a programmable EEPROM.

The board offers several advantages over the Odroid-N2 including eMMC storage, accelerometer, PCIe, and the M.2 option for NVMe. It’s smaller and its DSI interface is a step up from the Odroid-N2’s composite video interface. On the other hand, Hardkernel’s board has 4x USB 3.0 host ports and an SPDIF interface and audio DAC.

The first of three Khadas Vim3 models is “coming soon” at an undisclosed price. More information and a signup form for notifications may be found on Shenzhen Wesion’s Khadas Vim3 announcement and preliminary launch page.

This article originally appeared on LinuxGizmos.com on May 14.