Intel has rolled out new H-, M-, U- and T-series Intel Core and Xeon chips, expanding its line of 14 nm fabricated, 8th Gen Core Kaby Lake Refresh processors, code-named “Coffee Lake.” Of special interest are four new dual- and quad-core U-series chips with up to 2.7 GHz clock rates and 28 W TDPs, as well as four quad- and hexa-core H-series Core i5 and i7 processors and a pair of hexa-core M-series Xeon chips, all with 45 W TDP (total dissipated power). 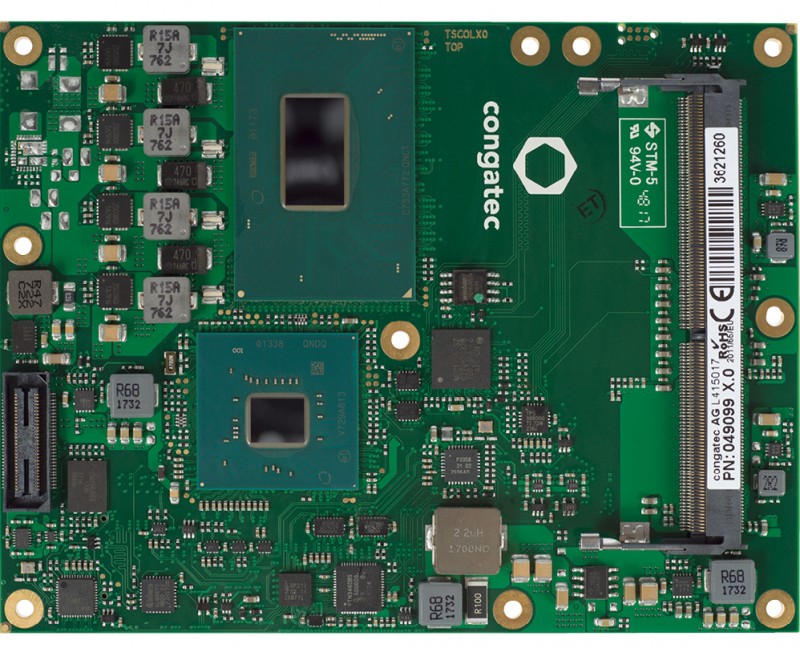 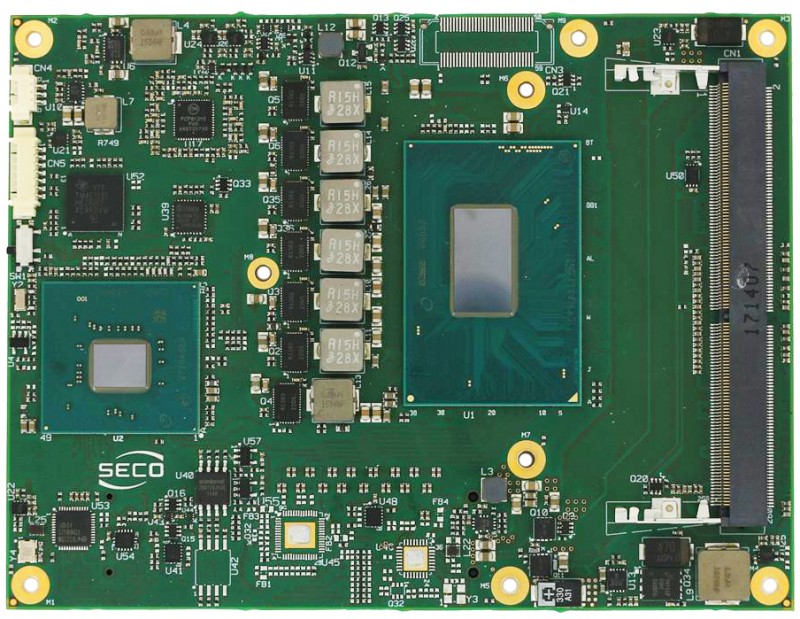 Intel launched its first round of 8th-Gen Kaby Lake Refresh “Coffee Lake” chips back in September. This fourth generation of its 14 nm fabricated Core chips — following Broadwell, Skylake, and Kaby Lake — offers relatively modest performance and power efficiency improvements.Like most of AMD’s new Ryzen Embedded V1000 SoCs, most of the Coffee Lake processors are double threaded, so four cores give you eight threads and six cores give you 12. The exception is a line of standard, desktop-oriented T-series chips with 35 W TDPs. The T-series models are all single-threaded except the top-of-the-line, hexa-core Core i7-8700T, clocked to 2.4 GHz /4.0 GHz. 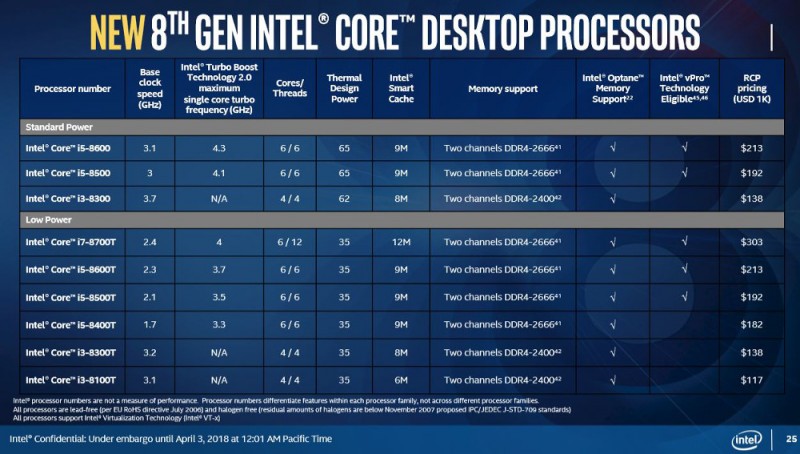 The latest batch of U-series processors give you more speed, but higher 28 W TDPs than the original batch. The initial U-series chips, which were used in recent Linux-based laptops from System76 and ZaReason, provide slightly faster quad- instead of dual-core designs with the same price and 15 W TDP as 7th-Gen “Kaby Lake” models. The first round of Coffee Lake chips also included some high-end models tuned to gaming, as well as the first hexa-core Core i5 and first quad-core Core i3 models.

Also today, Intel unveiled a new line of 300-series I/O chipsets that are based on the upcoming Cannon Lake PCH. The lineup includes a Q370 model that supports up to 6x USB 3.1 Gen2 ports, up to 24x PCIe 3.0 lanes, and Intel Wireless-AC for faster 802.11ac. 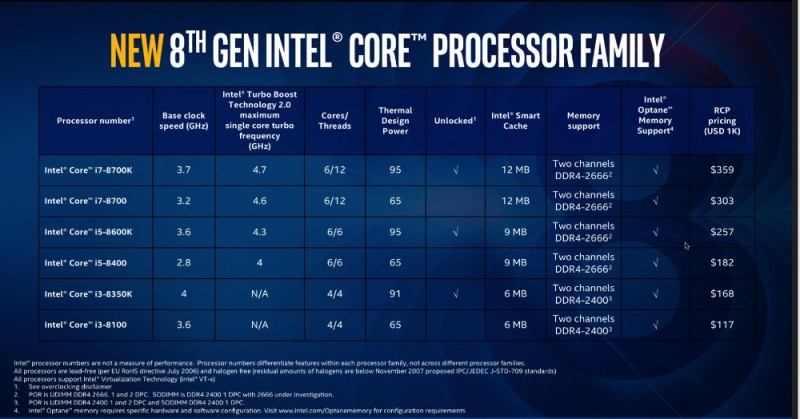 Intel’s original line of 8th Gen CPUs (top) and new 300-series I/O chipsets (bottom) (click images to enlarge)Intel added to the Coffee Lake parade with some gaming focused G-series chips that use a Radeon Vega GPU from rival AMD. The Core i7-8809G, which can be overclocked, as well as the fixed rate Core i7-8705G, are available in Intel NUC mini-PCs.Today’s media coverage emphasized Intel’s first mobile version of its gaming-oriented Core i9 design. The hexa-core Core i9-8950HK CPU uses thermal velocity boost” technology to jump from 2.9 GHz to 4.8 GHz.

All the models used by Congatec and Seco offer 45W TDPs and support Intel Optane memory and Intel VPro technology. As with other Coffee Lake processors, there are software patches to protect against Meltdown and Spectre vulnerabilities. However, a hardware fix will await the 10nm Cannon Lake generation.

The three models used by the Conga-TS370 and COMe-C08-BT6 modules are the:

Intel claims that the six-core H-series and M-series modules offer between 45 to 50 percent more multi-thread and 15 to 25 percent more single-thread performance compared to 7th Gen “Kaby Lake” Core processors. The built-in Intel Gen9 LP graphics can manage up to 3x independent displays at once, with a resolution up to 4096 x 2304 at 60 Hz, 24 bpp. There’s support for DirectX 12 and OpenGL 4.5, as well as an H.265 / HEVC hardware transcoder. 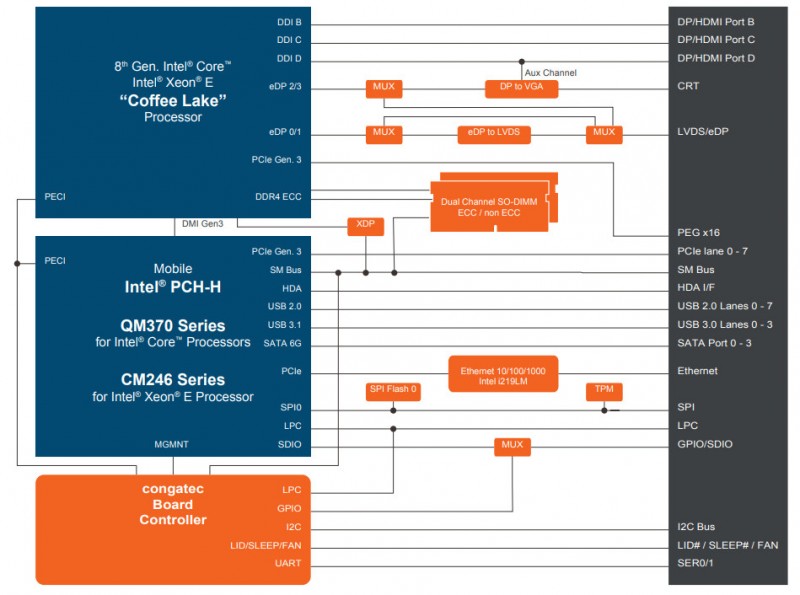 You can load up to 32GB of  DDR4-2666 memory via dual sockets with optional ECC. There are 4x SATA III interfaces, as well as an Intel i219-LM GbE controller with AMT 12.0 support. Expansion features include a PEG x16 Gen3 interface and 8x PCIe Gen 3.0 lanes.

The integrated Intel UHD630 graphics supports up to three independent 4K displays via HDMI 1.4a, eDP 1.4, and DisplayPort 1.2. Dual-channel LVDS is also available as an alternative to eDP, and for the first time, you can switch between eDP to LVDS by software alone, says Congatec.

The highlighted feature enabled by Coffee Lake-H is its support for up to 4x USB 3.1 Gen 2 ports, which operate at up to 10 Gbps. The module also includes 8x USB 2.0 interfaces.

Support services are available, along with a range of accessories and standardized or customized carrier boards and systems. A Conga-Teva2 carrier is in the works but is not yet documented. 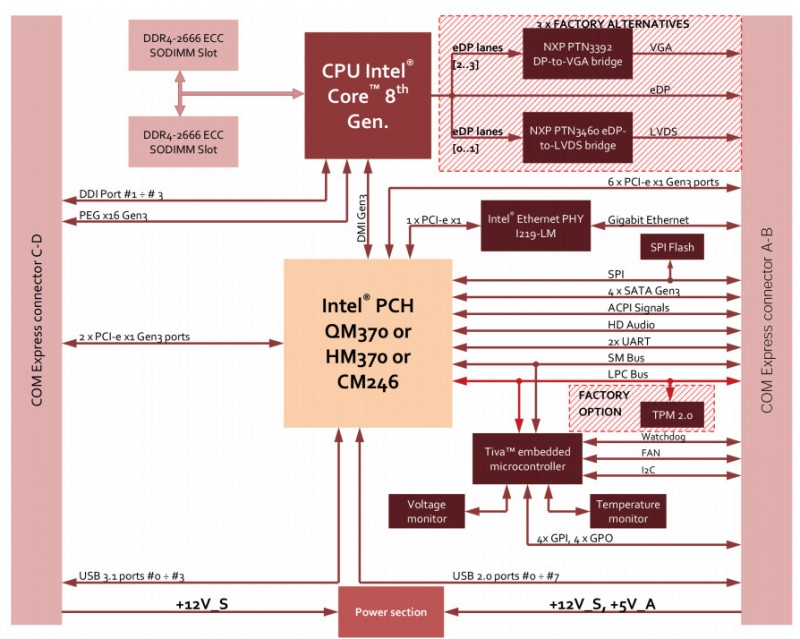 Not surprisingly, the feature set is very similar to that of the Conga-TS370. You get up to 3 2GB of DDR4-2666 with ECC, 4x SATA 3.0 channels, and an Intel i219-LM GbE controller.The COMe-C08-BT6 has the same triple display and 4K support as the Congatec model. In this case you get DP, HDMI, and DVI DDI interfaces, as well as a choice of eDP, LVDS, or LVDS + VGA interfaces. HD Audio is also available. 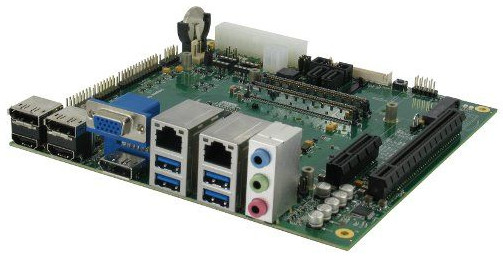 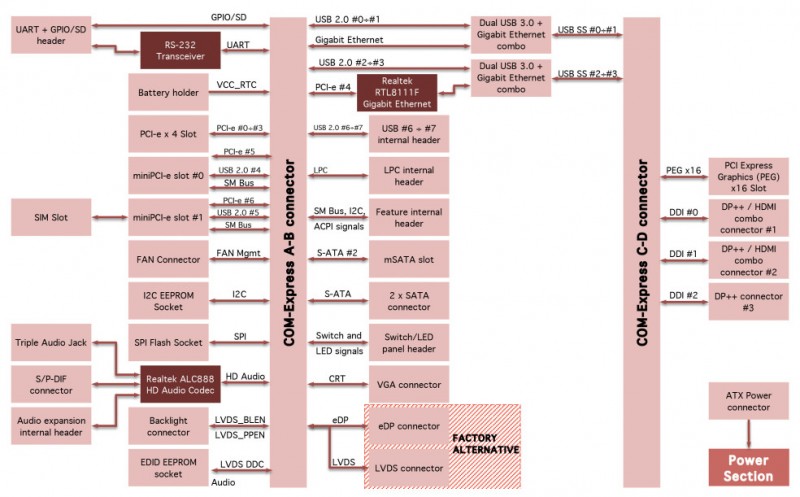 CCOMe-965 carrier (top) and block diagram (bottom)
(click images to enlarge)The COMe-C08-BT6 is available with Seco’s CCOMe-965 Mini-ITX carrier board, which also supports other Seco Type 6 modules such as the COMe-B09-BT6 and Ryzen V1000 based COMe-B75-CT6. There’s also a Cross Platform Development Kit that includes the CCOMe-965, along with HDMI and DisplayPort cables, and is said to support ARM-based Type 6 COMs in addition to x86. 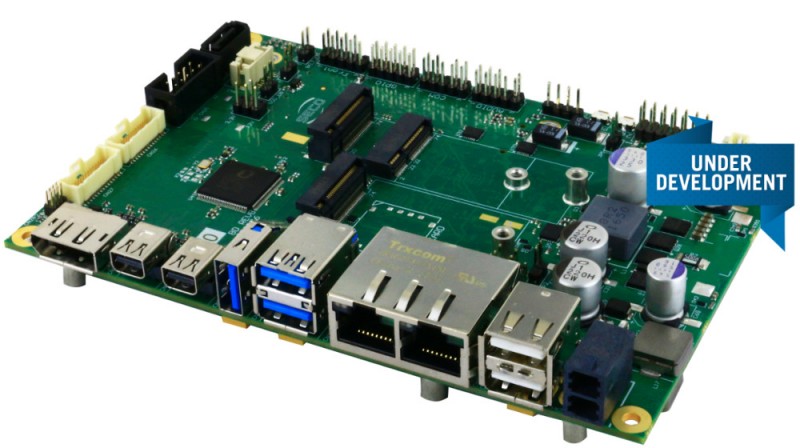 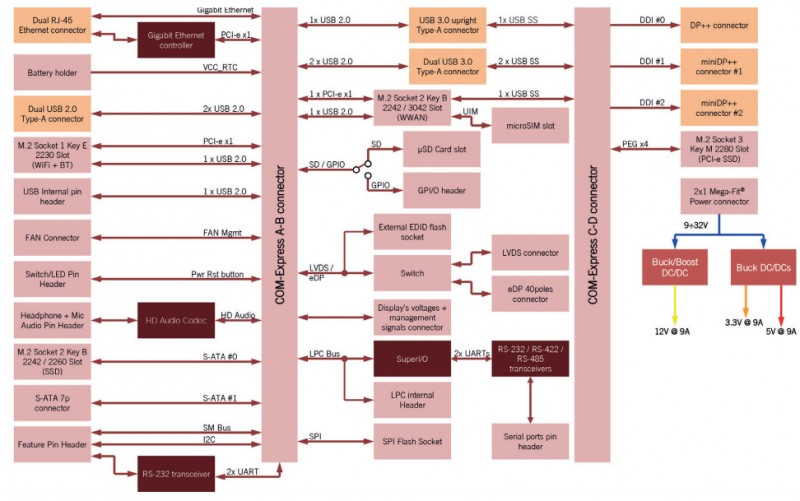 No pricing or availability information was provided for the Congatec Conga-TS370 or Seco COMe-C08-BT6 Type 6 modules. More on Congatec’s Conga-TS370 module may be found in the Conga-TS370 announcement and product pages.

Intel’s latest Intel Coffee Lake processors should start shipping in volume by the end of the month. More information may be found on Intel’s 8th Gen Intel Core announcement page.

This article originally appeared on LinuxGizmos.com on April 3.