Infineon Technologies recently announced that it developed a digital platform for power supply with which LED lighting systems can be controlled intelligently, thus making maximum energy savings possible. According to Infineon, with .dp digital power 2.0, development time can be reduced by up to 70%. The ICL8105 and ILD2111 controllers are the two new members of the platform. 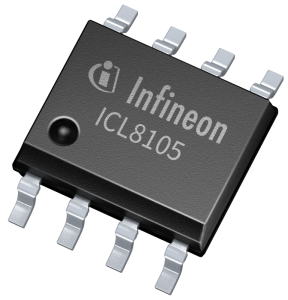 The ICL8105 is a digitally configurable flyback controller with Power Factor Correction (PFC) for constant power LED drivers from 10 to 80 W. Since only a few external components are required, a cost reduction of up to 10% is possible. The controller has powerful algorithms and supports multiple operating modes. Advantages are a high efficiency and power factor correction plus low distortion. This produces a high quality of light with no flickering. The controller has an input for 0 to 10 V dimming; there is no need for an oscillator including power supply. An active burst mode significantly extends the dimming range, while preventing undesirable effects such as flickering or shimmering. To protect the LED driver in case of overtemperature, the ICL8105 automatically reduces the output current in case of overload.

The ILD2111 is a digitally configurable buck controller that’s designed as a constant current source with output current control (backlash) for LED drivers in the range from 10 to 150 W. Thus, the regulator addresses diverse commercial LED applications. Like the ICL8105, the ILD2111 requires only a few external components. The output current can be set easily and accurately by a resistor, and is also compatible with the LEDset interface. The IC provides flicker-free PWM dimming down to 1%. The component automatically selects an operating window in order to optimally regulate different loads, depending on the switching frequency and the ripple of the output current. The output voltage is specified with 15 to 55 VDC. User-configurable features protect the component at undervoltage and overvoltage, short circuits, overcurrent or high temperatures.

Both the ICL8105 and the ILD2111 are available as samples and can be ordered in high volume. Development boards, the .dp Interface Board and the .dp Vision GUI software are offered for both controllers.