Home » Industrial Mini-ITX Board Pumps up with Coffee Lake

Commell’s “LV-67X” Mini-ITX board runs on 8th Gen “Coffee Lake” processors, with up to 32GB DDR4, 3x SATA, triple 4K displays, USB 3.1, and PCIe x16 and mini-PCIe expansion. The LV-67X, which shares some of the layout and feature set of its Intel Apollo Lake based LV-67U board, is the first industrial Mini-ITX board we’ve seen with Intel’s 8th Gen Coffee Lake CPUs. (Going forward, we’ll likely use the caffeinated nickname rather than “8th Gen” because Intel also applies the 8th Gen tag to the transitional and similarly 14nm Kaby Lake-G chips as well as the new, 10nm Cannon Lake processors.) 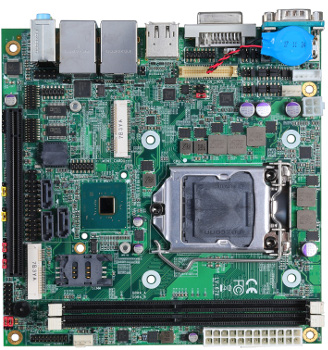 LV-67X
(click image to enlarge)
The LV-67X is called an industrial board, and it provides a relatively wide 0 to 60°C range and a smattering of industrial I/O. However, it has a full-height profile and bridges the gap to consumer applications. The board supports video gaming, virtual reality, medical devices, imaging, machine vision, and digital signage. The product page lists only Windows drivers, but the manual notes that the board also supports Linux.

The 170 x 170mm SBC supports Coffee Lake Core, Celeron, and Pentium CPUs that work with the FCLGA1151 socket (the full name for LGA1151). The board ships with Intel Q370 chipset, one of Intel’s 300-series I/O chips announced with Coffee Lake that supports USB 3.1 Gen2 and extensive PCIe lanes.

No specific models were mentioned, but the SBC is said to support Coffee Lake chips with up to six cores running at up to 4.7GHz Turbo, with Intel 9th-gen graphics and up to 12MB cache. That would be the profile for the top-of-the-line Core i7-8700K, a hexa-core chip with 12 threads and a 95W TDP. 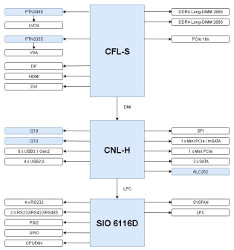 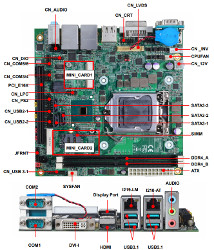 The description of the USB feature set varies depending on the citation, but Commell has clarified matters for us in an email. There are 6x USB 3.1 interfaces, 4x of which are coastline ports. There are also 4x USB 2.0 internal interfaces.

One key difference between earlier Core-based boards is that the LV-67X taps Coffee Lake’s ability to power three independent 4K displays. The board accomplishes this hat trick with coastline HDMI and DVI-I ports and an optional DisplayPort, as well as onboard VGA and 18/24-bit, dual-channel LVDS interfaces. If you don’t want the DisplayPort, you can instead get additional VGA and LVDS connections.

No pricing or availability information was provided for the LV-67X. More information may be found on Commell’s announcement and product pages.

This article originally appeared on LinuxGizmos.com on August 17..

Industrial Mini-ITX Board Pumps up with Coffee Lake