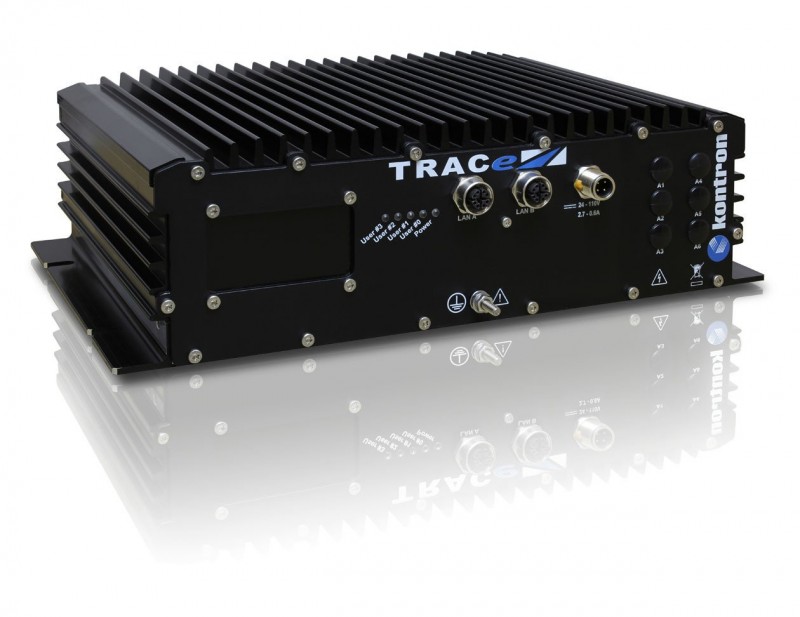 Kontron TRACe-B40x-TR has two independent networks (2x LAN with M12 connectors). It comes with an ultra-wide range power supply (from 24 VDC to 110 VDC nominal input voltage range, including tolerance range of +/- 40% required according to EN 50155, meaning a voltage range between 144 VDC and 154 VDC) adapted to all types of railway vehicles from light rail vehicles to high speed trains.

The front plate operational connectors are electrically insulated in compliance to EN50155 standard with lockable M12 connectors. The rear plate hosts standard connectors (display port, USB 3.0/2.0, serial line) for maintenance purposes and is protected from dust and water during operations with a cover plate. Thanks to its modularity, the TRACe-B40x-TR product also accommodates several optional wireless interfaces (such as Wi-Fi, 4G/LTE, and GNSS), field busses (RS422/485, CAN, MVB, and others), SATA devices (up to two 2.5’-inch SSD) and/or additional optional I/Os (such as DIOs, Audio, and USB) to match any railway applications such as on-board CCTV, entertainment/infotainment PIS or TCMS. Samples of the Kontron TRACe B404-TR are available now.