Lauterbach has announced that Hypervisor trace capability is now available for Arm Cortex-A and NXP QorIQ. Hypervisor tracing, which also means multicore tracing, requires high bandwidths from the off-chip tracing interface. The TRACE32 debug tool can now be used to trace all components in a Hypervisor based embedded system, as well as debug them. 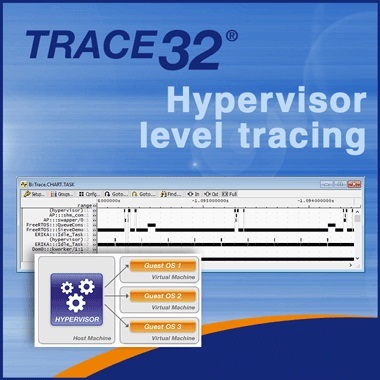 Program flow and data trace are very important items in the embedded engineer’s toolbox. They allow a developer to see the path that has been taken through the code and to step backwards from an error or exception to see the root cause. Tracing from multiple cores allows a developer to easily see the interaction between software executing on disparate processors and readily identify bottlenecks, logic bombs or other errors that may only show up at runtime. Trace filters at task or virtual machine level allow developers to reduce the amount of trace generation to show only areas of interest in the system.

Program flow trace can be timestamped, allowing a picture of how long or how frequently something is executed to be built up. From this data it is also possible to determine code coverage metrics to satisfy the demands of safety certification for embedded systems.