New consumer research from Futuresource Consulting highlights a significant increase in consumers’ intentions to purchase wearable devices. Interviewing more than 8,000 people in May and and October in the US, the UK, France, and Germany, the study saw interest in fitness trackers and smart watches rise by 50% and 125%, respectively. However, interest in smart glasses and heart rate monitors has stalled. 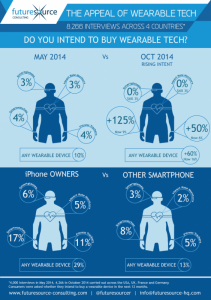 The overall wearables market has seen significant growth so far in 2014, with Futuresource forecasting full-year sales of over 51 million units worldwide. However, it’s only just warming up, and wearables sales are expected to accelerate from 2015 as new brands enter the space.

The most marked change since May is the strong growth in the number of iPhone owners intending to purchase wearable devices. iPhone owners now lead the way in all categories – particularly in smartwatches, which 17% of iPhone owners expressed an intent to purchase in the next 12 months, up from only 6% in May 2014. This increase coincides with September’s announcement of the Apple Watch. As Apple customers are typically some of the earliest adopters of new technologies, their increasing engagement with the smartwatch category is a strong positive for the Apple Watch release in early 2015.