Gateworks has spun a variant of its GW6100 networking SBC that adds a second mini-PCIe slot, upgrades the USB port to 3.0, and expands the length of the board from 100mm to a 110 x 35 x 21mm footprint. Gateworks has a variety of similarly headless boards that run Linux on Marvell OcteonTX from its Cavium subsidiary. Most are larger, however, such as the 105 x 100mm, dual GbE port Newport GW6300. 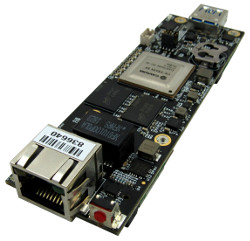 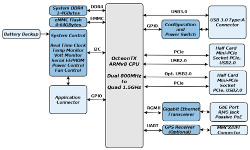 The Newport GW6903 supplies OpenWrt and Ubuntu BSPs to run on an OcteonTX CN8120 with dual ARMv8 ThunderX cores clocked to 800MHz. The CNXSoft piece that alerted us to the SBC says it also supports the quad-core, 1.5GHz CN8130, but this appears to available only for volume customizations along with RAM, flash, and peripheral changes.

Aside from the features noted above, other differences include substantial layout changes and a switch from a USB Type-C connector to a standard Type-A host port. There are fewer I/O’s listed for the DIO “application” connector and the anti-tamper switch has disappeared

Also, there’s no longer mSATA support on the mini-PCIe slots, and the nano-SIM slot has been removed. The dual half-sized mini-PCIe slots support PCIe, and one also supports USB 2.0. WiFi and cellular modems including LTE are available from Gateworks’ growing catalog of mini-PCIe cards, which last year added Cat-M1/BLE 5.0 and Iridium satellite cards.

Specifications listed for the Newport GW6903 include:

No pricing or availability information was provided for the Newport GW6903. More information may be found on Gateworks’ product page.

This article originally appeared on LinuxGizmos.com on March 6, 2020.