Advantech previewed its WISE-710 gateway back in May and has now announced its release on Design World. The 100 x 70 x 36mm “industrial protocol gateway” runs Ubuntu 16.04 or the optional Yocto 2.1 on the tried-and-true NXP i.MX6 DualLite, which has shipped on earlier Advantech embedded computers such as its UBC-220. 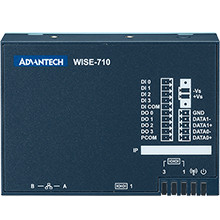 WISE-710 on the desktop and wall

The WISE-710 can optionally be loaded with Advantech’s WISE-PaaS/EdgeLink protocol-conversion software, which supports more than 200 communication protocols including Modbus, OPC-UA, MQTT, and IEC-60870-5-104 “to enable data collection from legacy devices,” says Advantech. WISE-PaaS/EdgeLink offers LWM2M client and Node ID technology and supports user-defined data acquisition periods for each input interface, “thereby reducing the volume of data transmitted and stored on the cloud.”

The 1GHz, dual-core -A9 i.MX6 Dual is accompanied by 1GB DDR3, 8GB eMMC, and a microSD slot that supports data logger microSD cards. There are dual (non-native) GbE ports and a full-size mini-PCIe slot with optional WiFi, 3G/4G LTE (with SIM slot), and optional antennas. The announcement also mentions an optional NB-IoT wireless module, but it was not included in the accessory list. 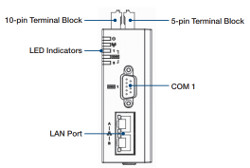 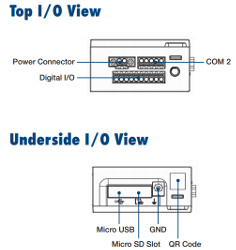 The WISE-710 is further equipped with a micro-USB 2.0 host port plus RS232/485 and RS485/CAN serial ports and an internal RS485 interface. The system integrates isolated 4-in/4-out DIO with “wet contact & dry contact by switch,” as well as a modular interface that supports one of two additional options: 8x analog inputs with 4x digital inputs or 4x RTD (Resistance Temperature Detector) inputs with 4x thermocouple channels.

Multiple LEDs are included and you can choose from wall, DIN-rail, and pole-mount options. The detail view also shows a GND connection and a QR code interface.

Further information
The WISE-710 is available now at an undisclosed price. More information may be found on Advantech’s WISE-710 product page.

This article originally appeared on LinuxGizmos.com on September 26.
Advantech | www.advantech.com