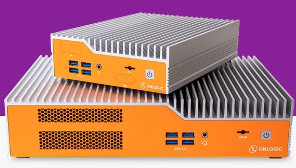 The systems provide a choice of Comet Lake-S systems ranging from the dual-core, up to 3.2GHz G5900T to the 10-core, up to 4.5GHz Core i7-10900T. The processors integrate Intel UHD Graphics 630 and are accompanied by an Intel Q470 chipset. There is support for Intel technologies including Intel vPro with AMT, Intel Virtualization Technology for Directed I/O (Intel VT-d), and Intel Rapid Storage Technology (Intel RST).

Despite the 10th Gen title, Comet Lake should probably be named Coffee Lake Refresh Part Two, as it continues to use a 14nm process and Skylake microarchitecture. Yet, there are incremental improvements to power efficiency, thermal packaging, cache, and performance, as well as lower prices.

Although not mentioned on the product pages, the datasheet lists an M.2 E-key 2230 socket with PCIe, USB 2.0, and CNVi, and a mini-PCIe slot with PCIe and USB 2.0. A 3FF-Sim slot supports the B-key or mini-PCIe, and there are 6x antenna holes. Wireless options include either a WiFi-ac/BT 4.2 card or Extrovert 4G LTE Modem.

The Helix Series computers run on 12-24V DC power via a Mini-DIN connector or optional terminal block. There is also a power button and a 220W power supply.

The systems support a 0 to 50°C range, which might be reduced depending on expansion options. Like the Helix 500, the Helix 600 runs fanless for the main computer, but offers a separate fan dedicated to cooling the PCIe x16 slot so you can switch it off and save power if it’s not loaded with a high-powered graphics card.

The Helix 500 and Helix 600 is available now starting at $768 and $859, respectively, with a Celeron G5900T, 4GB RAM, 64GB SSD, and no OS (Ubuntu costs $10). More information may be found in OnLogic’s announcement and the Helix 500 and Helix 600 product and shopping pages. OnLogic will host an Aug. 4 when OnLogic is hosting an online launch event for the Helix Series.

This article originally appeared on LinuxGizmos.com on July 21, 2020.