Diamond Systems announced a Stevie carrier board for Nvidia’s high-end Jetson AGX Xavier module. In the Stevie announcement, Diamond also promoted some other Jetson carriers and embedded systems, some of which appear to be relatively new. All the products ship with Linux BSPs.

After our Stevie report, we’ll summarize Diamond Systems’ Elton, also for the Xavier, plus the Jethro and Ziggy carriers, both of which support the earlier Jetson TX2 and industrial-temperature Jetson TX2i. Diamond also included the Ziggy-based ZiggyBox mini-PC and its Jetbox-Nano enclosure for Nvidia’s Jetson Nano Development Kit for the Jetson Nano module. 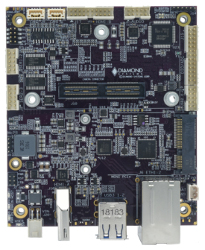 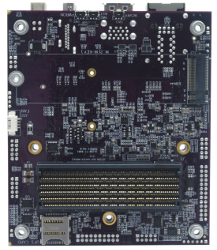 While Connect Tech Inc. (CTI) has named many of its Jetson carrier boards on characters from The Jetsons cartoon, such as the Astro, Orbitty, and Elroy, Diamond appears to be adopting a rock & roll theme with apparent nods to Stevie Ray Vaughan, Elton John, Jethro Tull, and David Bowie’s Ziggy Stardust. (Its earlier Nvidia Tegra TK1 compatible Eagle and Eaglet carriers perhaps channeled Glenn Frey and crew.)

Aetina, meanwhile, uses its ACE brand name for Jetson carriers such as the TX2i ready ACE-N620, ACE-N510, and ACE-N622. There are other many other carriers and embedded systems that extend the Jetson modules such as Deepwave Digital’s TX2- and Artix-7 powered AIR-T SDR board. Jetson-based camera systems include E-con Systems’ Xavier-focused SurveilsQUAD camera rig.

Nvidia’s Linux-driven Jetson modules have varying levels of Arm processing power and GPUs capable of running its CUDA libraries for vision processing and AI applications. They also provide different levels of RAM, eMMC, and in some cases, WiFi/Bluetooth. An up-to-date comparison of the various modules may be found in our Jetson Nano report.

Unlike the slightly smaller, more rugged, and more expandable Elton carrier for the Xavier (see below), Stevie has a variety of real-world ports for easier connectivity. Documentation is still limited for the “preliminary” Stevie, but coastline ports include an HDMI port, 2x Gigabit Ethernet, and 2x USB 3.1 ports. The block diagram suggests there’s a second HDMI port, which might be an input interface. 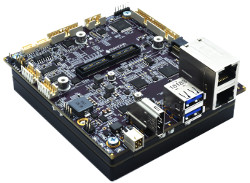 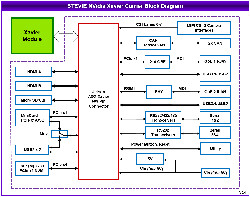 The Stevie board provides connectors for up to 8x MIPI-CSI HD cameras or 4x 4K cameras. It is further equipped with a micro-SD slot plus mini-PCIe and M.2 slots supporting I/O add-ons and SSD storage. Other features include 2x CAN, 4x serial, an audio interface, and a 9-20VDC input.

Stevie has an MCU-driven data acquisition circuit with 12-bit A/D up to 1MSPS, 12-bit D/A, and 3.3V GPIO. Diamond supports these interfaces with a free C-language programming library, as well as a GUI control panel for “convenient control and monitoring of real-world processes as well as ready-to-run data logging capability.”

CTI’s Rogue carrier for the Xavier has a somewhat similar set of I/O. It has more USB ports and M.2 slots but is limited to 6x CSI cameras.

The Elton board is the only Nvidia Jetson carrier with a PCI/104-Express expansion socket, claims Diamond. While the similarly AGX Xavier focused Stevie offers more opportunity for prototyping and evaluation, Elton is aimed more at direct deployment with the similarly size, 100 x 87mm Xavier. The -40 to 85°C. tolerant system is designed for “high performance computing and AI applications in mobile and harsh environments,” says Diamond. 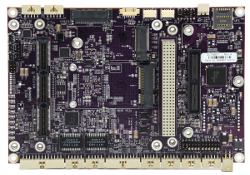 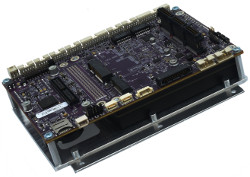 Elton (left) and with heat spreader
(click images to enlarge) 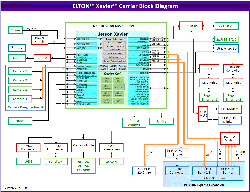 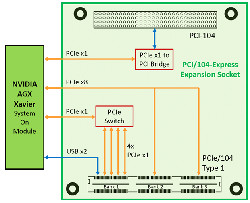 The Jethro carrier extends the mid-range, hexa-core Jetson TX2 module with 256-core Pascal graphics, as well as the similar Jetson TX2i, which adds -40 to 85°C and 10-year support. Both modules provide 8GB LPDDR4, 32GB eMMC 5.1, and 802.11ac WiFi and Bluetooth. 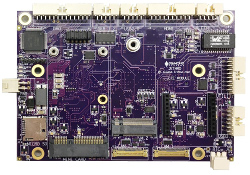 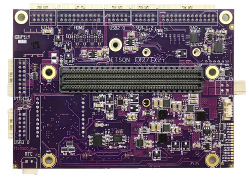 The 107 x 76mm Jethro matches the temperature range of the TX2i. Like Elton, there are headers with latching connectors, thereby improving ruggedization. A 9-18VDC (TX2) or 5.5-18VDC (TX2i) DC input is also available

The Jethro carrier offers a microSD slot and an M.2 2242 socket for up to 256GB SSDs. There’s also a mini-PCIe slot that supports Nimbelink Skywire cellular modules.

Interfaces include single GbE, USB 3.0, and HDMI headers plus 2x USB 2.0, 2x RS-232, and 2x 4-lane CSI camera inputs. There’s also a DAQ array and software stack with 12x GPIO much like the Stevie and Elton.

The “cost effective” Jetson TX2/TX2i compatible Ziggy is to Jethro like Stevie is to Elton. Like Stevie, it has conventional coastline ports, but is smaller, with a TX2-like 87 x 50mm footprint. Unlike Stevie, there’s -40 to 85°C support. 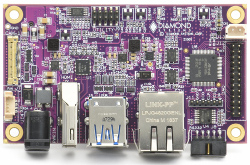 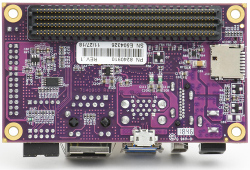 Ziggy’s ports include GbE, USB 3.0, USB 2.0, micro-USB OTG, and HDMI. Additional interfaces include 2x RS-232, a single 4-lane CSI connector, and a utility connector with I2C, UART, power, and reset pins. There’s also a DAQ layout and power inputs identical to Jethro’s. A microSD slot is on the flipside.

The Ziggy is also available as part of an enclosed ZiggyBox system, which exposes all real-world ports and adds COM/DIO and DAQ ports. There are also WiFi and Bluetooth antennas for the TX2/TX2i’s wireless module, plus a heat sink and support for an optional fan. 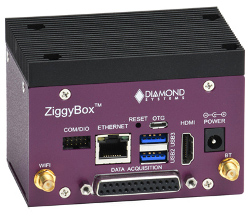 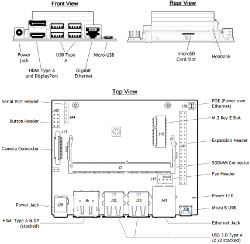 Diamond still lacks a carrier board for the new, low-power Jetson Nano, but in the meantime, it offers a Jetbox-Nano enclosure kit for Nvidia’s $99 Jetson Nano Development Kit. The “rugged” and “low-cost” steel enclosure measures 125 x 95 x 34mm.

Standard ports are exposed on one side, while the left side provides access to the serial port and camera flex cable port. On the right side, there is a GPIO port and optional connector and on the rear is a programming button for software updates. A DIN-rail mount is also available.

No pricing or availability information was provided for the “preliminary” Stevie carrier for the Jetson AGX Xavier. The other boards and systems appear to be available now with pricing undisclosed. More information may be found on Diamond’s Stevie, Elton, Jethro, Ziggy and ZiggyBox, and Jetbox-Nano product pages.

This article originally appeared on LinuxGizmos.com on December 23, 2019.