Dialog Semiconductor has announced its SmartBond DA1469x family of Bluetooth low energy SoCs, a range of multi-core MCUs for wireless connectivity. The devices’ three integrated cores have each been carefully chosen for their capabilities to sense, process and communicate between connected devices, says Dialog. To provide the devices’ processing power, the DA1469x product family is the first wireless MCU in production with a dedicated application processor based on the Arm Cortex-M33 CPU, according to Dialog. 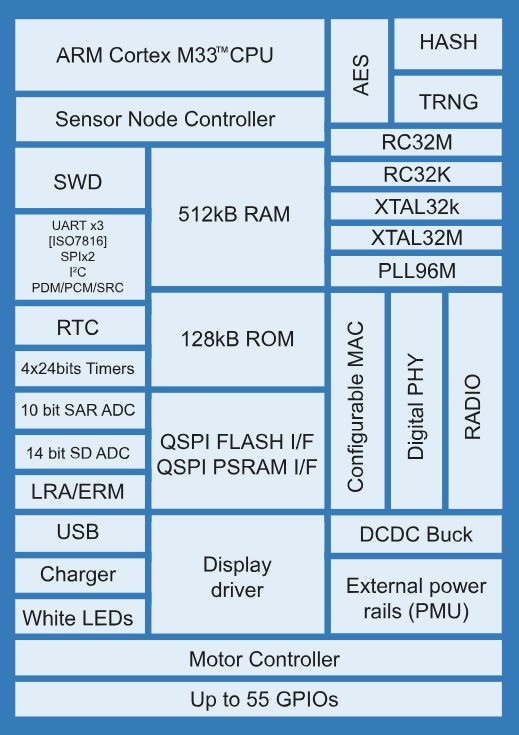 The M33 is aimed at compute intensive applications, such as high-end fitness trackers, advanced smart home devices and virtual reality game controllers. The DA1469x devices have a new integrated radio that offers double the range compared to its predecessor together with an Arm Cortex-M0+ based software-programmable packet engine that implements protocols and provides full flexibility for wireless communication.

On the connectivity front, an emerging application is for manufacturers to deploy accurate positioning through the Angle of Arrival and Angle of Departure features of the newly introduced Bluetooth 5.1 standard. With its world-class radio front end performance and configurable protocol engine, the DA1469x complies with this new version of the standard and opens new opportunities for devices that require accurate indoor positioning such as building access and remote keyless entry systems.

To enhance the sensing functionality of the DA1469x, the M33 application processor and M0+ protocol engine is complemented with a Sensor Node Controller (SNC), which is based on a programmable micro-DSP that runs autonomously and independently processes data from the sensors connected to its digital and analog interfaces, waking the application processor only when needed. In addition to this power-saving feature, a state-of-the-art Power Management Unit (PMU) provides best-in-class power management by controlling the different processing cores and only activating them as needed.

The SoCs feature up to 144 DMIPS, 512 KB of RAM, memory protection, a floating-point unit, a dedicated crypto engine to enable end-to-end security and expandable memories, ensuring a wide range of advanced smart device applications can be implemented using the chipset family and supporting a range of key value-add interfaces to extend functionality even further.

The PMU also provides three regulated power rails and one LDO output to supply external system components, removing the requirement of a separate power management IC (PMIC). Additionally, the DA169x product family come equipped with a range of key value-add interfaces including a display driver, an audio interface, USB, a high-accuracy ADC, a haptic driver capable of driving both ERM and LRA motors as well as a programmable stepping motor controller.

Developers working with the DA1469x product family can make use of Dialog’s software development suite – SmartSnippets – which gives them the tools they need to develop best-in-class applications on the new MCUs. The DA1469x variants will start volume production in the first half of 2019. Samples and development kits are available now.