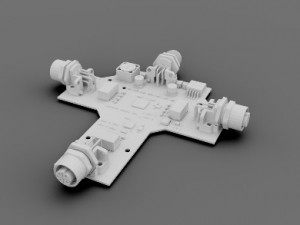 “In mass production, these moldings are manufactured using injection molding techniques, for prototyping purposes this method is not economically feasible,” Beta LAYOUT stated in a release.

In the near future, Beta LAYOUT will offer the ability to manufacture MID components in prototype and small batch quantities, including the production of formed components by 3-D printing, metallic coating, laser patterning, selective metallization, and mounting. Start of production is planned for the second quarter of 2015. For design of 3D-MID components, developers can download the free PCB – POOL edition of layout software TARGET 3001.

With “brd – to – 3D,” Beta LAYOUT offers a comprehensive 3-D package. The complete virtual circuit board package can be created directly from an EAGLE *.brd file. Features include photo realistic images of the PCB, SMD stencil and STEP file generation. In addition, a freely rotatable 3-D view in PDF format is created, which you can view with Adobe Reader. A link to order a laser sintered 3-D model of the assembled PCB is provided and a free 3-D model is offered with PCB-POOL prototype orders and can be used effectively for collision checking.

Visit Beta LAYOUT in hall A2, booth 357 at the upcoming Electronica trade show in Munich (November 11–14, 2014) for information on 3D-MID prototypes and other products.