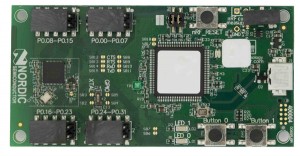 The nRF51822-mKIT simplifies and accelerates the prototyping process for Bluetooth Smart sensors connecting to the Internet of Things (IoT). The platform is designed for fast, easy, and flexible development of Bluetooth Smart applications.

The nRF51822 system-on-chip (SoC) combines a Bluetooth v4.1-compliant 2.4-GHz multiprotocol radio with an ARM Cortex-M0 CPU core on a single chip optimized for ultra-low-power operation. The SoC simplifies and accelerates the prototyping process for Bluetooth Smart sensors connecting to the IoT.

The nRF51822-mKIT’s features include a Bluetooth Smart API, 31 pin-assignable general-purpose input/output (GPIO), a CMSIS-DAP debugger, Programmable Peripheral Interconnect (PPI), and the ability to run from a single 2032 coin-cell battery.

Through mbed, the kit is supported by a cloud-based approach to writing code, adding libraries, and compiling firmware. A lightweight online IDE operates on all popular browsers running on Windows, Mac OSX, iOS, Android, and Linux OSes. Developers can use the kit to access a cloud-based ARM RVDS 4.1 compiler that optimizes code size and performance.