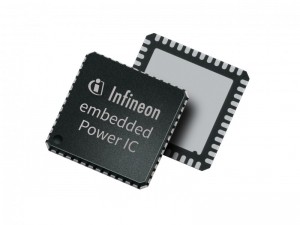 Infineon combined its proprietary automotive qualified 130-nm Smart Power manufacturing technology with its vast experience in motor control drivers into the new, highly integrated Embedded Power family, available in a standard QFN package of only 7 mm × 7 mm in dimension. Where previous multi-chip designs needed a standalone microcontroller, a bridge driver, and a LIN transceiver, automotive system suppliers now benefit from motor control designs of minimum external components count. The newly released Embedded Power products reduce the component count down to less than 30, thus allowing integration of all functions and associated external components for the motor control in a PCB area of merely 3 cm². As a result, the Embedded Power family enables the integration of electronics close to the motor for true mechatronic designs.

Both the TLE987x and TLE986x bridge drivers use the ARM Cortex TM-M3 processor. Their peripheral set includes a current sensor, a successive approximation 10-bit ADC synchronized with the capture and compare unit (CAPCOM6) for PWM control and 16-bit timers. A LIN transceiver is integrated to enable communication to the devices along with a number of general-purpose I/Os. Both series include an on-chip linear voltage regulator to supply external loads. Their flash memory is scalable from 36 to 128 KB. They operate from 5.4 V up to 28 V. An integrated charge pump enables low-voltage operation using only two external capacitors. The bridge drivers feature programmable charging and discharging current. The patented current slope control technique optimizes the system EMC behavior for a wide range of MOSFETs. The products can withstand load dump conditions up to 40 V while maintaining an extended supply voltage operating down to 3.0V where the microcontroller and the flash memory are fully functional.

Engineering samples of the TLE987x and TLE986x bridge drivers in a space-saving VQFN-48 package are available with volume production planned to start in Q1 2015. For both series, there are several derivatives available, differing for example in system clock (24 MHz or 40 MHz) and flash sizes.