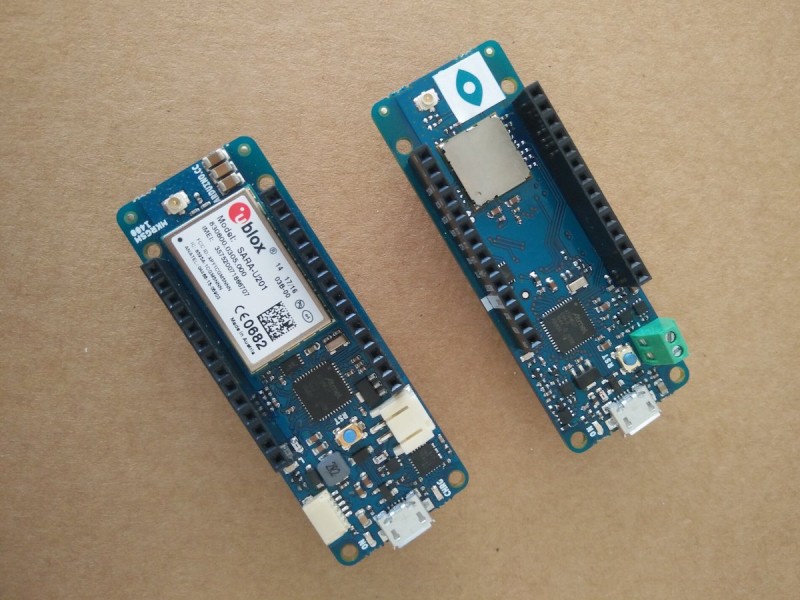 Offering 32-bit computational power similar to the Arduino MKR ZERO board, the MKR WAN 1300 is based around the Murata LoRa low-power connectivity module and the Microchip SAM D21 microcontroller, which integrates an ARM Cortex-M0+ processor, 256 KB Flash memory and 3 2KB SRAM. The board’s design includes the ability to be powered by either two 1.5 V AA or AAA batteries or an external 5 V input via the USB interface—with automatic switching between the two power sources.

In addition, the MKR WAN 1300 offers the usual rich set of I/O interfaces expected with an Arduino board, and ease of use via the Arduino IDE software environment for code development and programming. Other features  include an operating voltage of 3.3 V; eight digital I/Os; 12 PWM outputs; and UART, SPI and I2C interfaces.

Like the MKR WAN 1300, the Arduino MKR GSM 1400 is based on the SAM D21, but integrates a u-blox module for global 3G communications. The board features automatic power switching, however, it uses either a 3.7 V LiPo battery or an external Vin power source delivering 5 V to 12 V. While the USB port can also be used to supply 5 V to the board, the MKR GSM 1400 is able to run with or without the battery connected.

The MKR GSM 1400 provides a rich set of I/O interfaces including: eight digital I/Os; 12 PWM outputs; UART, SPI and I2C interfaces; analog I/O including seven inputs and one output; and eight external interrupt pins. Both boards are now available for pre-order on the Arduino Store.