Audeme has released a $6.50 “Raspberry Pi MOVI Adapter” board and API to enable a Raspberry Pi pairing with its MOVI Arduino Shield for offline speech recognition and synthesis.

We’re used to seeing Arduino compatible, MCU-driven HATs and other add-ons for the Raspberry Pi, but in 2015 Audeme flipped that combo on its head with a Linux-driven voice shield for the Arduino called the MOVI Arduino Shield Speech Recognizer and Speech Synthesizer. At the recent Maker Faire Bay Area 2019, the company released a $6.50 adapter board that lets the MOVI Arduino Shield work with a Raspberry Pi. 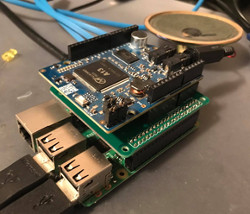 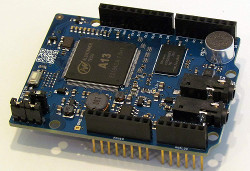 MOVI Arduino Shield with Raspberry Pi and new Pi Adapter (left) and the current v1.1 version of the MOVI shield on its own
(click images to enlarge)
The $75 MOVI (My Own Voice Interface) Arduino Shield offers “Internet-free” speech recognition and synthesis for up to 150 customizable English sentences. MOVI offers voice control for applications like turning devices on and off, entering alarm codes, and carrying on programmed conversations. The device is speaker independent, so there’s no voice training involved, and it uses no cloud services, thereby enabling offline applications free from privacy or reliability concerns. 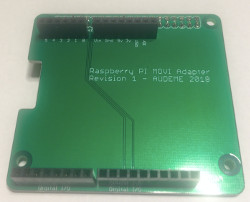 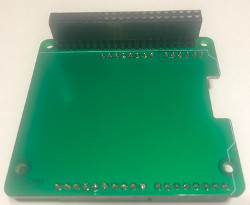 Raspberry Pi MOVI Adapter, front and back
(click images to enlarge)
The MOVI board runs Debian Linux on the 1 GHz, Cortex-A8 based Allwinner A13. An SD card stores the Debian build, along with sentence, call sign, and configuration data. The board has a microphone with automatic gain-control to detect speech at up to 10 feet in a quiet environment. An external microphone input is available, and a speaker is optional.

At the time of the Kickstarter launch, Audeme said that Linux hackers could access the board’s low -level serial interfaces to use it with the Raspberry Pi. The new adapter eases the much-requested Pi pairing along with a new Raspberry Pi-friendly version of its open source, Arduino IDE-based library.

Audeme also added an open source Python API for the Pi, and previous Arduino projects can be compiled against the C++ version of the PI library without code change. Community features on the website include a forum.

This article originally appeared on LinuxGizmos.com on May 21.

Adapter Enables Offline Speech Board to Work with Raspberry Pi