Measurement Computing Corp. (MCC) has launched its third DAQ HAT for the Raspberry Pi, this time taking on temperature measurement. The $149 MCC 134 Thermocouple Measurement HAT follows its MCC 118 voltage measurement DAQ HAT with eight ±10 V inputs and sample rates up to 100 kS/s and its MCC 152 voltage output and digital I/O HAT with dual 0-5 V analog outputs at up to 5 kS/s and 8x configurable DIO. 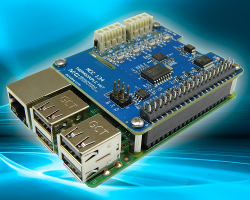 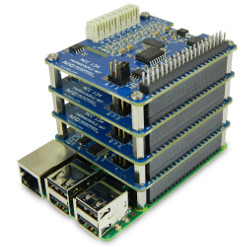 MCC 134 with Raspberry Pi (left) and stacked MCC 134 boards
(click images to enlarge)
The MCC 134 lets you connect four differential thermocouples to the electrically isolated input channels to take temperature measurements. It supports thermocouple types J, K, R, S, T, N, E, and B, which are software selectable per channel, with the values updated at a minimum of one-second intervals.

The MCC 134 also offers open thermocouple detection so users can monitor for broken or disconnected thermocouples. Each channel type is selectable on a per-channel basis. The board provides a HAT-compatible 40-pin GPIO for easy installation. Other features include a 24-bit A/D converter, 3x cold-junction compensation (CJC) sensors, and linearization features.

MCC 134 block diagram
(click image to enlarge)
You can stack up to 8x MCC DAQ HATs per a single Raspberry Pi, mixing and matching the different boards to “configure multifunction, Pi-based solutions with analog input, output, and digital I/O,” says MCC. The MCC 134 has been tested with the Raspberry Pi 3 3B+, 3, 2, and A+ models. 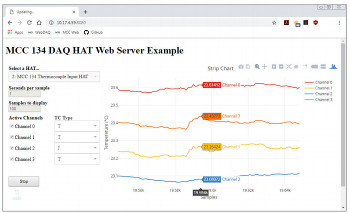 The MCC 134 Thermocouple Measurement HAT is available now for $149. More information may be found on MCC’s MCC 134 product page.

This article originally appeared on LinuxGizmos.com on June 13.