Maxwell Technologies has announced the addition of a 2.85-V, 3400-F cell to its K2 family of ultracapacitors. It is the most powerful cell available in the industry-standard, 60-mm cylindrical form factor. Incorporating Maxwell’s DuraBlue Advanced Shock and Vibration technology, it is a rugged cell that’s suitable for high-energy storage in demanding environments (e.g., in public transit vehicles). 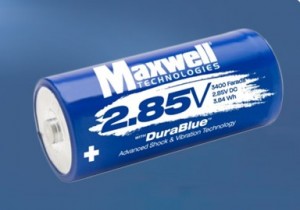 The electrostatic charge can be cycled over a million times without performance degradation. The cells can also provide extended power and energy for long periods of propulsion in automotive subsystems and give fast response in UPS/Backup Power and grid applications to ensure critical information is not lost during dips, sags, and outages in the main power source. In addition, they can relieve batteries of burst power functions, thereby reducing costs and maximizing space and energy efficiency.

The K2 family of cells work in tandem with batteries for applications that require both a constant power discharge for continual function and a pulse power for peak loads. In these applications, the ultracapacitor relieves batteries of peak power functions resulting in an extension of battery life and a reduction of overall battery size and cost. The cells are available with threaded terminals or with compact, weldable terminals.