Nvidia’s Jetson Xavier NX was announced last November. The module recently launched on Arrow (with a “no stock” tag) for $459 — $60 over the previously announced $399 price. Nvidia has yet to launch its promised development kit for the Xavier NX module, which brings a mix of features from the Jetson AGX Xavier on the high end and the Jetson Nano on the low. For now, you can use the Nvidia Jetson Xavier Developer Kit and apply a patch to emulate the NX.

Meanwhile, several third-party vendors have stepped in with their own NX development kits. This week, D3 Engineering opened pre-orders on a DesignCore Nvidia Jetson Xavier NX 12-Camera Carrier Board that can handle a dozen camera feeds at once. We also see that Diamond Systems has posted a preliminary product page for a more general-purpose Floyd carrier for the NX. 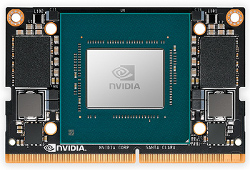 In the flurry of announcements at Embedded World at the end of February, we missed an announcement by Connect Tech Inc. (CTI) about its new Quark Carrier for the NX. Like the D3 and Diamond boards, it also supports the pin-compatible Jetson Nano. 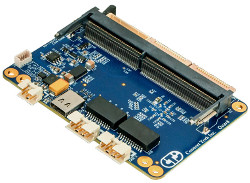 Before we take a closer look at the three new boards, we’ll briefly recap some other Nano carriers that now support the Xavier NX as well. As we reported in our February roundup of Jetson Nano carriers, AverMedia’s compact EN715-AAC2-0000 carrier and higher-end EN713-AAE9-0000 board with 8x 10/100Mbps PoE PSE ports also support the Xavier NX. An AeyeQ board mentioned in the story that supports both the NX and Nano failed to reach its goal for its all-or-nothing Kickstarter campaign.

Our February roundup also reported on Auvidea’s JN30A and JN30B carriers for the Nano. Auvidea’s Xavier NX landing page says that the JN30B will support the NX, “as long as the 5V peak power consumption stays below 3A.” The company adds that a JNX30 board due to arrive later this month “will fully support the Xavier NX at full current consumption (15 watt mode with a peak current of up to 5A).” The Auvidea home page has an image and brief blurb on the JNX30 along with other new products including a compact J125 and larger J143 carriers for the Jetson TX2 and an X220-LC dev board for the AGX Xavier.

At Embedded World, Auvidea teased (PDF) two new carrier boards that support the NX and Nano: a JN34 board with 6x FPD-Link III inputs and a Dual CPU JN80 board that also supports the TX2 and enables dual modules in operation at once. We will return in a week or so for a separate Auvidea story on all these products, perhaps with fresh pricing and availability info.

The Jetson Xavier NX module has a more powerful CPU and GPU than the 87 x 50mm Jetson TX2 while shrinking to the 70 x 45mm size of the Jetson Nano. The Xavier NX runs Ubuntu Linux on 6x ARMv8.2 Carmel CPU cores and provides graphics and AI processing on its 384-core Volta GPU, compared to the 512-core Volta GPU on the Jetson AGX Xavier.

The Xavier NX can run at a low of 10W — twice the minimum power consumption of the Nano. At that level, it can deliver 14 TOPS neural processing power, rising to 21 TOPS at 15W. By comparison, the larger, octa-core AGX Xavier runs at up to 30 TOPS. The Xavier NX has twice the RAM of the Nano with 8GB LPDDR4 and similarly supplies 16GB eMMC.

In January, D3 Engineering announced a DesignCore RVP-TDA4Vx Dev Kit dev kit built on TI’s Jacinto 7 TDA4VM ADAS SoC. Now it has returned with a camera-oriented DesignCore carrier for the Xavier NX and Nano. The board is aimed at AI-enabled robotics, autonomous machines, camera monitoring systems, industrial vehicle systems, and machine vision in areas such as manufacturing, delivery, retail, and agriculture. 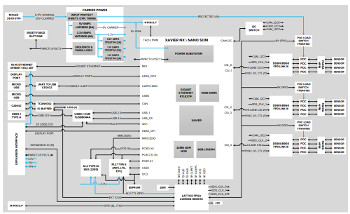 The DesignCore Nvidia Jetson Xavier NX 12-Camera Carrier Board is equipped with 12x FPD-Link III Coax camera or sensor inputs that feed into the board via 3x Quad FAKRA connectors. D3 also offers a variety of cameras and sensors, including radar sensors, which can be placed up to 15 meters away. Sensor support includes OmniVision OV10640, OV2311 On-Semi AR0820, AR0233, AR0234, Sony IMX390, and IMX490.

Data from the serial links are deserialized via 3x DS90UB960 components into MIPI-CSI2 data that can be processed by the Xavier NX. An on-board FPGA provides hardware-level synchronization.

The 5 x 4-inch (127 x 101.6mm) board is equipped with single GbE with PoE, USB 3.1, USB Type-C, and a DisplayPort. An expansion header lets you add options including a second DP or HDMI port, a USB Type-C port, and PoE. There’s a microSD slot, as well as M.2 M-key and E-key slots that are available with optional SSDs and WiFi/BT or LTE modules, respectively. Onboard interfaces include GPIO, CAN, and UART.

The NX 12-Camera Carrier has a 6.5-17V DC input (12V nominal) and can operate at -25 to 85°C. It’s unclear what resolution is available with the camera inputs, and whether the resolution and the number of camera inputs is reduced when using a Nano instead of an NX.

Diamond Systems has posted a preliminary product page for a carrier board for the Xavier NX and Nano called the Floyd. Continuing Diamond’s rock-themed naming scheme, the name conjures up Pink Floyd, and perhaps its masterpiece, “Shine on You Crazy Diamond.” 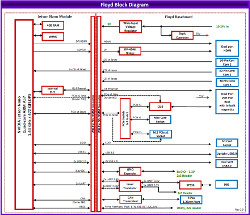 There’s also a version of the Floyd with an enclosure and heatsink called the JetBox-Floyd available with either the Nano or the Xavier NX. All the standard ports are exposed, as well as two additional DB9 serial ports. An antenna mount supports the built-in WiFi/BT module.

The new Quark Carrier from Connect Tech Inc. (CTI) is optimized for the Jetson Xavier NX, but also supports the Jetson Nano. CTI has previously released Jetson carriers such as the Jetson TX1 compatible Orbitty and Elroy. 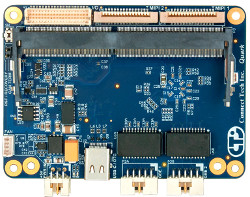 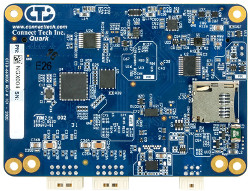 Quark Carrier, front and back
(click images to enlarge)

Measuring only slightly larger than the Xavier NX at 82.6 x 58.8mm, the headless Quark has a microSD slot and only one real-world port: a USB 3.1 OTG Type-C. Other interfaces expressed through pin headers, pitch connectors, and positive locking I/O connectors include 2x GbE, 2x 2-lane MIPI-CSI2, 3x 3.3V UART, 2x I2C, 8x GPIO (2x with PWM), and single CAN 2.0b and SPI.

The Quark has a 5V DC input and -40 to 85°C support. A variety of active and passive heating solutions are available. There’s also a Rudi-NX embedded computer equipped with the Xavier NX, but it does not appear to be built on the Quark, so we will cover it in an upcoming roundup of Xavier NX based embedded PCs.

D3 Engineering’s DesignCore Nvidia Jetson Xavier NX 12-Camera Carrier Board is available for pre-order at an undisclosed price. More information may be found in the announcement and product page (PDF).

Diamond System’s “preliminary” Floyd Carrier for Nvidia Jetson Nano & Xavier NX is on back order for $224. More information may be found on the product page and shopping page.

Connect Tech Inc’s (CTI) Quark Carrier is available now at an undisclosed price. More information may be found in the announcement and product page.

This article originally appeared on LinuxGizmos.com on April 15, 2020.