In August, Commell launched the LV-67X, one of the first industrial Mini-ITX boards with Intel’s 8th Gen “Coffee Lake” CPUs. Now, it has followed up with a Coffee Lake based 3.5-inch LS-37L board. The SBC has the same FCLGA1151 socket, supporting up to 6-core, 65W TDP Coffee Lake S-series processors such as the 3.1GHz/4.3GHz Core i5-8600.

Commell lists only Windows drivers on the product page, but the user manual notes support for Linux. The company also recently announced a Coffee Lake based, PICMG 1.3 form factor FS-A79 board. 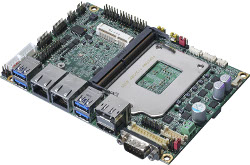 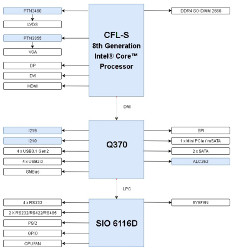 LS-37L and block diagram
(click images to enlarge)
The only other 3.5-inch (146 x 101mm) Coffee Lake board we’ve seen is Avalue’s ECM-CFS. Like that board, the LS-37L has a 0 to 60°C range and supports up to 16GB DDR4 (2666MHz). Other features are very close, with the main difference being the LS-37L’s wide-range 9-25V supply in place of a standard 12V input. The LS-37L also offers more USB and serial headers and adds a PS/2 interface, an RTC with battery, an LCD inverter, and a SIM slot. However, it lacks the Avalue board’s ACPI power management and optional TPM.

Like the ECM-CFS, Commell’s board features triple display support, but instead of dual HDMI ports plus LVDS you get a choice of two configurations. The standard LS-37L model supplies an HDMI port, a DisplayPort, and internal DVI, VGA, and LVDS interfaces. The LS-37LT SKU replaces the DisplayPort with a second VGA or LVDS header. 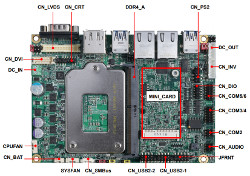 Specifications listed for the LS-37L include:

No pricing or availability information was provided for the LS-37L SBC. More information may be found in Commell’s LS-37L announcement and product page.

This article originally appeared on LinuxGizmos.com on December 6.