The Eclipse Foundation’s Eclipse IoT Working Group has released the results of its IoT Developer Survey 2018, which surveyed 502 Eclipse developers between January and March 2018. While the sample size is fairly low—LinuxGizmos’  own 2017 Hacker Board survey had 1,705 respondents—and although the IoT technologies covered here extend beyond embedded tech into the cloud, the results sync up pretty well with 2017 surveys of embedded developers from VDC Research and AspenCore (EETimes/Embedded). In short, Linux rules in Internet of Things development, but FreeRTOS is coming on fast. In addition, Amazon Web Services (AWS) is the leading cloud service for IoT. 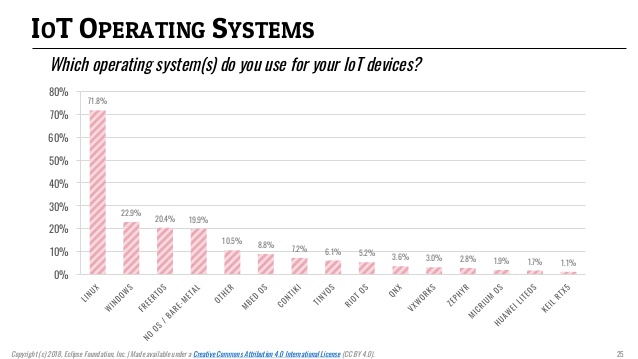 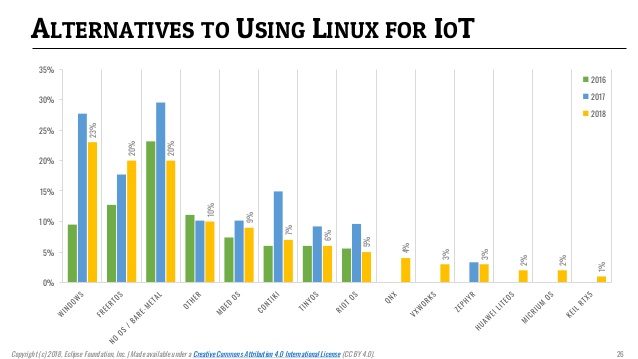 When asked what operating systems were used for IoT, a total of 71.8% of the Eclipse survey respondents listed Linux, including Android and Android Things (see farther below). The next highest total was for Windows at 23%, a slight decrease from last year.

The open source, MCU-focused FreeRTOS advanced to 20%. Last December, the FreeRTOS project received major backing from Amazon. In fact, the Eclipse Foundation calls it an “acquisition.” This is never an entirely correct term when referring to a truly open source project such as FreeRTOS, but as with Samsung’s stewardship of Tizen, it appears to be essentially true.

Amazon collaborated with FreeRTOS technical leaders in spinning a new Amazon FreeRTOS variant linked to AWS IoT and AWS Greengrass. The significance of Amazon’s stake in FreeRTOS was one of the reasons Microsoft launched its Linux-based Azure Sphere secure IoT SoC platform, according to a VDC Research analyst.

The growth of FreeRTOS and Linux has apparently reduced the number of developers who code IoT devices without a formal OS or who use bare metal implementations. The “No OS/Bare Metal category” was second place in 2017, but has dropped sharply to share third place with FreeRTOS at 20%.

Other mostly open source RTOSes that had seen increases in 2017, such as mBed, Contiki, TinyOS, and Riot OS, dropped in 2018, with Contiki seeing the biggest dive. All these platforms led the open source Zephyr, however, as well as proprietary RTOSes like Micrium PS. The Intel-backed Zephyr may have declined in part due to Intel killing its Zephyr-friendly Curie module. 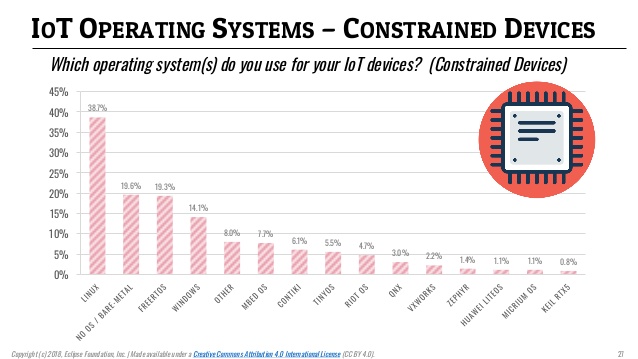 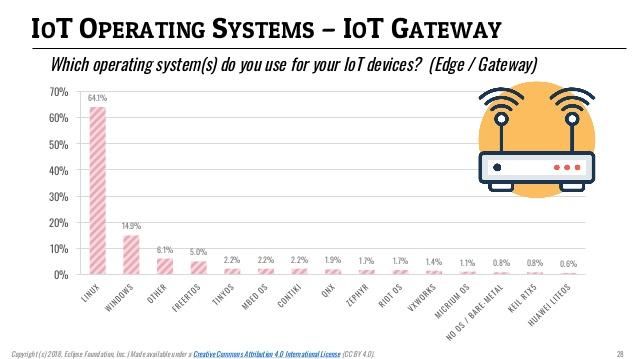 (Source: Eclipse Foundation)
(click images to enlarge)
When the Eclipse Foundation asked what OS was used for constrained devices, Linux still led the way, but had only 38.7%, followed by No OS/Bare Metal at 19.6%, FreeRTOS at 19.3%, and Windows at 14.1%. The others remained in the same order, ranging from Mbed at 7.7% to Riot OS at 4.7% for the next four slots.

When developers were asked about OS usage for IoT gateways, Linux dominated at 64.1% followed by Windows at 14.9%. Not surprisingly, the RTOSes barely registered here, with FreeRTOS leading at 5% and the others running at 2.2% or lower. 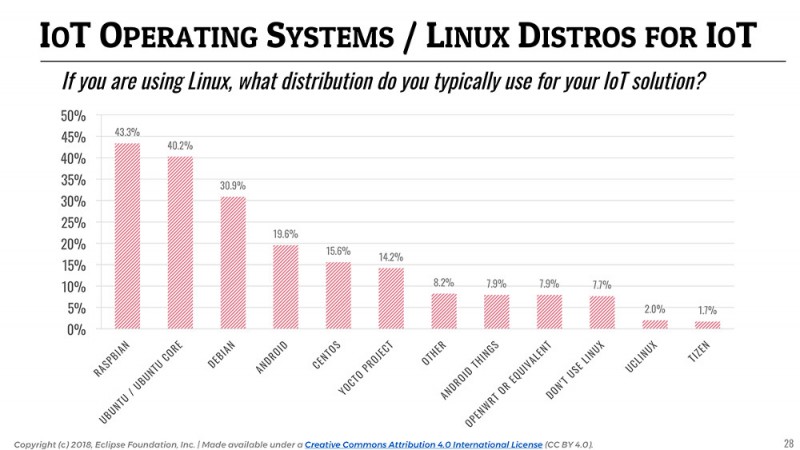 Eclipse IoT survey results for most popular Linux distributions
(Source: Eclipse Foundation)
(click image to enlarge)
Raspbian was the most popular Linux distro at 43.3%, showing just how far the Raspberry Pi has come to dominate IoT. The Debian based Ubuntu and more IoT-oriented Ubuntu Core were close behind for a combined 40.2%, and homegrown Debian stacks were used by 30.9%.

Android (19.6%) and the IoT-focused Android Things (7.9%) combined for 27.5%. Surprisingly, the open source Red Hat based distro CentOS came in next at 15.6%. Although CentOS does appear on embedded devices, its cloud server/cloud focus suggests that like Ubuntu, some of the Eclipse score came from developers working in IoT cloud stacks as well as embedded.

Yocto Project, which is not a distribution, but rather a set of standardized tools and recipes for DIY Linux development, came next at 14.2%. The stripped-down, networking focused OpenWrt and its variants, including the forked LEDE OS, combined for 7.9%. The OpenWrt and LEDE OS projects reunited as OpenWrt in January of this year. A version 18, due later this year, will attempt to integrate those elements that have diverged.

The remainder of the survey dealt primarily with IoT software. Amazon’s AWS, which is the cloud platform used by its AWS IoT data aggregation platform and the related, Linux-based AWS Greengrass gateway and edge platform, led IoT cloud platforms with 51.8%. This was a 21% increase over the 2017 survey. Microsoft Azure’s share increased by 17% to 31.2%, followed by a combined score for private and on-premises cloud providers of 19.4%.

The total that used Google Cloud dropped by 8% to 18.8%. This was followed by Kubernetes, IBM Bluemix, and OpenStack On Premises.

Other survey findings include the continuing popularity of Java and MQTT among Eclipse developers. Usage of open source software of all kinds is increasing — for example, 93% of respondents say they use open source data base software, led by MySQL. Security and data collection/analytics were the leading developer concerns for IoT while interoperability troubles seem to be decreasing.

There were only a few questions about hardware, which is not surprising considering that Eclipse developers are primarily software developers. Cortex M3/M4 chips led among MCU platforms. For gateways there was an inconclusive mix of Intel and various Arm Cortex-A platforms. Perhaps most telling: 24.9% did not know what platform their IoT software would run on.

They did, however, know their favorite IDE. It starts with an E.

More information on the Eclipse IoT Developer Survey may be found in this blog announcement by Benjamin Cabé, which links to a slides from the full survey.

This article originally appeared on LinuxGizmos.com on April 30.