The July issue of Circuit Cellar magazine is coming soon. And we’ve rustled up a great herd of embedded electronics articles for you to enjoy.

TECHNOLOGIES FOR THE INTERNET-OF-THINGS

Wireless Standards and Solutions for IoT
One of the critical enabling technologies making the Internet-of-Things possible is the set of well-established wireless standards that allow movement of data to and from low-power edge devices. Here, Circuit Cellar’s Editor-in-Chief, Jeff Child, looks at key wireless standards and solutions playing a role in IoT. 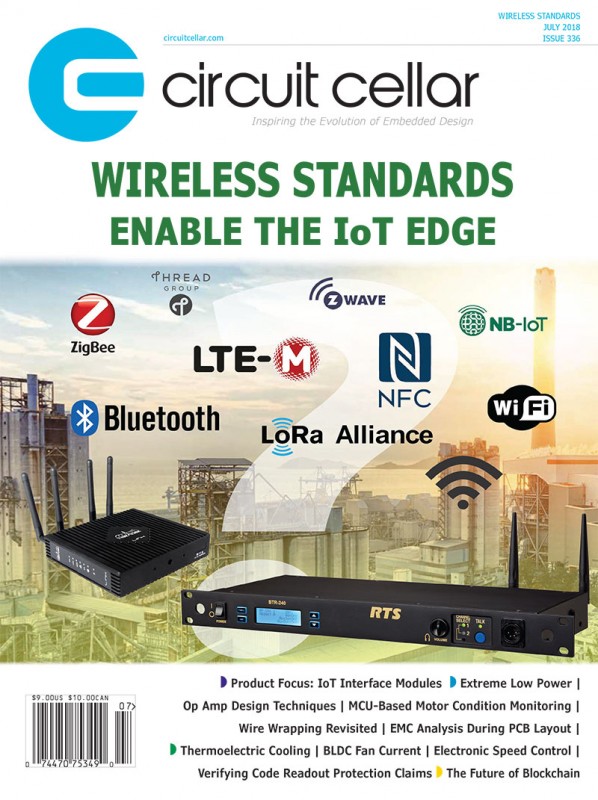 TOOLS AND TECHNIQUES AT THE DESIGN PHASE

EMC Analysis During PCB Layout
If your electronic product design fails EMC compliance testing for its target market, that product can’t be sold. That’s why EMC analysis is such an important step. In his article, Mentor Graphics’ Craig Armenti shows how implementing EMC analysis during the design phase provides an opportunity to avoid failing EMC compliance testing after fabrication.

Wire Wrapping Revisited
Wire wrapping may seem old fashioned, but this tried and true technology can solve some tricky problems that arise when you try to interconnect different kinds of modules like Arduino, Raspberry Pi and so on. Wolfgang Matthes steps through how to best employ wire wrapping for this purpose and provides application examples.

BLDC Fan Current
Today’s small fans and blowers depend on brushless DC (BLDC) motor technology for their operation. In this article, Ed Nisley explains how these seemingly simple devices are actually quite complex when you measure them in action. He makes some measurements on the motor inside a tangential blower and explores how the data relates to the basic physics of moving air.

Electronic Speed Control (Part 1)
An Electronic Speed Controller (ESC) is an important device in motor control designs, especially in the world of radio-controlled (RC) model vehicles. In Part 1, Jeff Bachiochi lays the groundwork by discussing the evolution of brushed motors to brushless motors. He then explores in detail the role ESC devices play in RC vehicle motors.

MCU-Based Motor Condition Monitoring
Thanks to advances in microcontrollers and sensors, it’s now possible to electronically monitor aspects of a motor’s condition, like current consumption, pressure and vibration. In this article, Texas Instrument’s Amit Ashara steps through how to best use the resources on an MCU to preform condition monitoring on motors. He looks at the signal chain, connectivity issues and A-D conversion.

AND MORE FROM OUR EXPERT COLUMNISTS

Verifying Code Readout Protection Claims
How do you verify the security of microcontrollers? MCU manufacturers often make big claims, but sometimes it is in your best interest to verify them yourself. In this article, Colin O’Flynn discusses a few threats against code readout and looks at verifying some of those claimed levels.

Thermoelectric Cooling (Part 1)
When his thermoelectric water color died prematurely, George Novacek was curious whether it was a defective unit or a design problem. With that in mind, he decided to create a test chamber using some electronics combined with components salvaged from the water cooler. His tests provide some interesting insights into thermoelectric cooling.