Many complicated motion control and power electronics systems comprise thousands of parts and dozens of embedded systems. Thus, it makes sense that a systems engineer like New Jersey-based John Roselle would have more than one workspace for simultaneously planning, designing, and testing multiple systems. 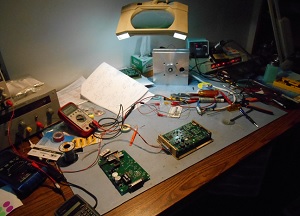 Roselle recently submitted images of his space and provided some interesting feedback when we asked him about it.

My main work space for testing and debugging of circuits consists of nothing more than a kitchen table with two shelves attached to the wall.  Shown in the picture (see above) a 265-V digital motor drive for a fin control system for an under water application.  In a second room I have a computer design center.

I design and test mostly motor drives for motion control products for various applications, such as underwater vehicles, missile hatch door motor drives, and test equipment for testing the products I design.

John’s third workspace is used mainly for testing and assembling. At times there might be two or three different projects going on at once, he added. 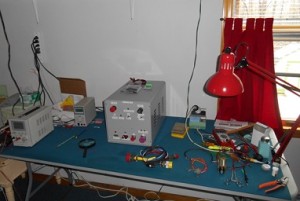 The third space is used to test and assemble systems (Source: John Roselle)

Do you want to share images of your workspace, hackspace, or “circuit cellar”? Send us your images and info about your space.