Gerry O’Brien, a Toronto-based robotics and electronics technician at R.O.V. Robotics, enjoys working on a variety of projects in his home lab. His projects are largely driven by his passion for electronics hardware interfacing.

Gerry’s background includes working at companies such as Allen-Vanguard Corp., which builds remotely operated vehicle (ROV) robots and unmanned ground vehicles (UGVs) for military and police bomb disposal units worldwide. “I was responsible for the production, repair, programming and calibration of the robot control consoles, VCU (vehicle control unit) and the wireless communication systems,” he says.

Gerry recently sent Circuit Cellar photos of his home-based electronics and robotics lab. (More images are available on his website.) This is how he describes the lab’s layout and equipment:

In my lab I have various designated areas with lab benches that I acquired from the closing of a local Nortel  R&D office over 10 years ago.

All of my electronics benches have ESD mats and ground wrist straps.  All of my testing gear, I have purchased on eBay over the years…. 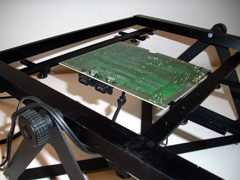 To start, I have my “Electronics Interfacing Bench” with a PCB flip-rack , which allows me to Interface PCBs while they are powered (in-system testing). I am able to interface my Tektronix TLA715 logic analyzer and other various testing equipment to the boards under test. My logic analyzer currently has two  logic I/O modules that have 136 channels each. So combined, I have 272 channels for logic analysis. I also have a four-channel digital oscilloscope module to use with this machine. I can now expand this even further by interfacing my newly acquired expansion box, which allows me to interface many more modules to the logic analyzer mainframe. 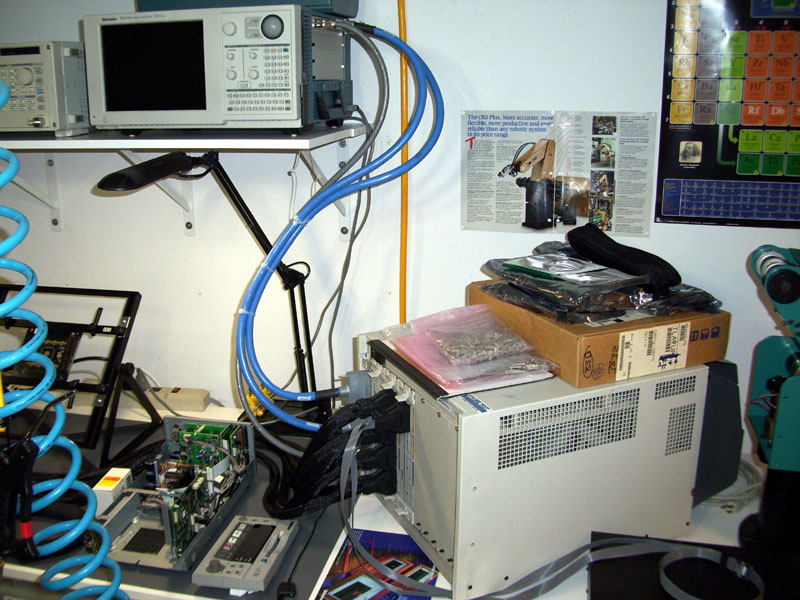 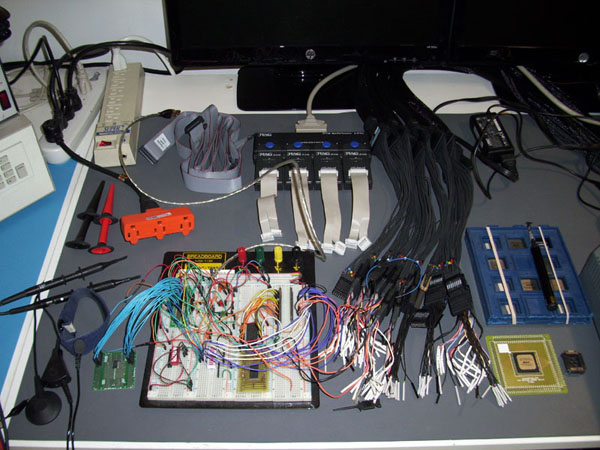 I also have a soldering bench where I have all of my soldering gear, including a hot-air rework station and 90x dissecting microscope with a video interface. 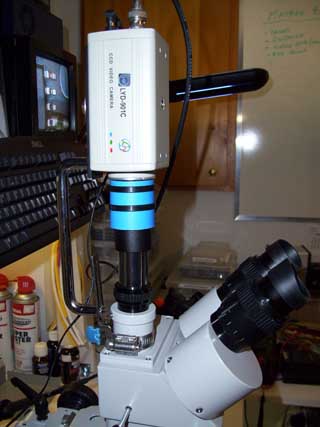 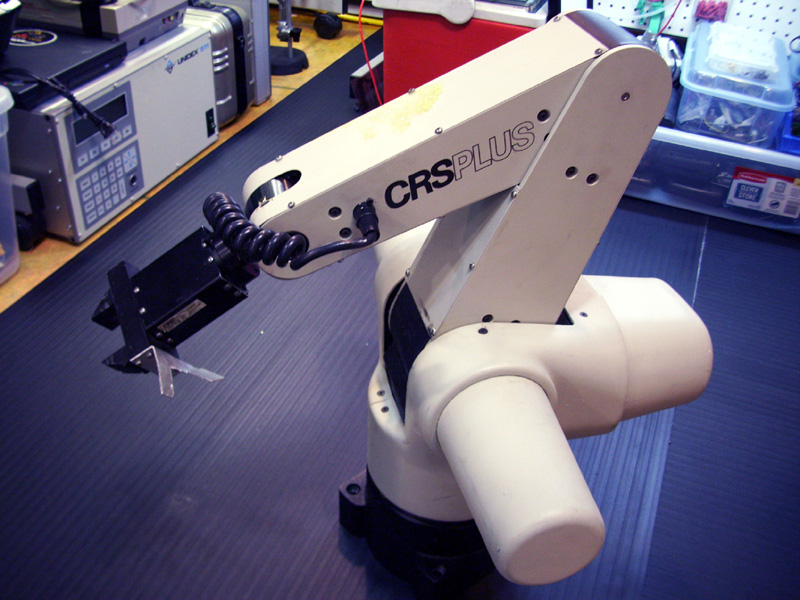 On my testing bench, I currently have an Agilent/HP 54610B 500-MHz oscilloscope with the GPIB to RS-232 adapter for image capturing. I also have an Advantest model R3131A 9 kHz to 3-GHz bandwidth spectrum analyzer, a Tektronix model AFG3021 function generator, HP/Agilent 34401A multimeter and an HP 4CH programmable power supply. For the HP power supply, I built a display panel with four separate voltage output LCD displays, so that I can monitor the voltages of all four outputs simultaneously. The stock monochrome LCD display on the HP unit itself is very small and dim and only shows one output at a time.

Anyhow, my current testing bench setup will allow me to perform various signal mapping and testing on chips with a large pin count, such as the older Altera MAX9000 208-pin CPLDs and many others that I enjoy working with. 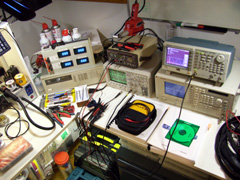 And last but not least… I have my programming and interfacing bench devoted to VHDL programming, PCB Design, FPGA hardware programming (JTAG), memory programming (EEPROM  and flash memory), web design, and video editing. 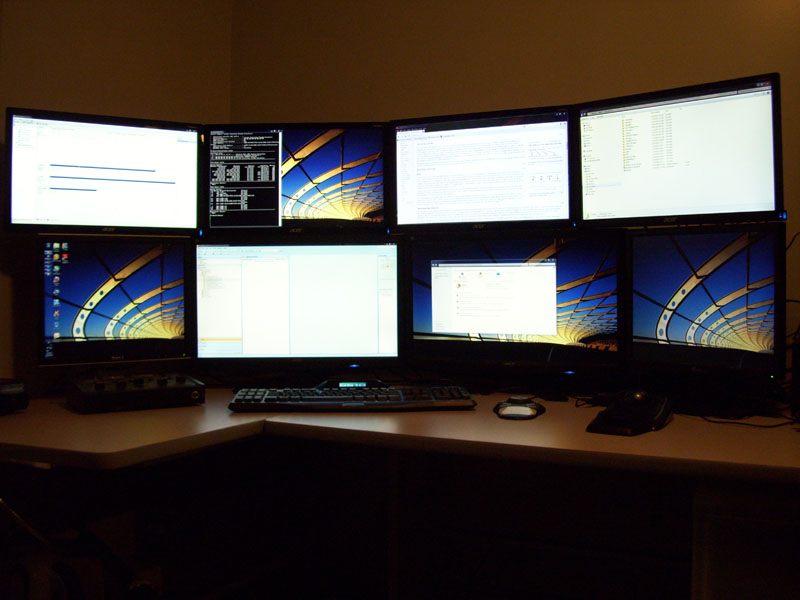 I built a PC computer and by using  a separate graphics display cards, one being an older Matrols four-port SVGA display card; I was able to build a “octo-display” setup. It seamlessly shares eight monitors providing a total screen resolution size of 6,545 x 1,980 pixels.

If you care to see how my monitor mounting assembly was built, I have posted pictures of its construction here.

I love projects that involve hardware Interfacing.  My area of focus is on electronics hardware compared to software programming. Which is one of the reasons I have focused on VHDL programming (hardware description language) for FPGAs and CPLDs.

I leave the computer software programming of GUIs to others. I will usually team up with other hobbyists that have more of a Knack for the Software programming side of things.  They usually prefer to leave the electronics design and hardware production to someone else anyhow, so it is a mutual arrangement.

I love to design and build projects involving vintage Altera CPLDs and FPGAs such as the Altera MAX7000 and MAX9000 series of Altera components. Over the years, I have a managed to collect a large arsenal of vintage Altera programming hardware from the late ’80s and early ’90s.  Mainly for the Altera master programming unit (MPU) released by Altera in the early ’90s. I have been building up an arsenal of the programming adapters for this system. Certain models are very hard to find. Due to the rarity of this Altera programming system, I am currently working on designing my own custom adapter interface that will essentially allow me to connect any compatible Altera component to the system… without the need of the unique adapter. A custom made adapter essentially.  Not too complicated at all really, it’s just a lot of fun to build and then have the glory of trying out other components.

I love to design, build, and program FPGA projects using the VHDL hardware description language and also interface to external memory and sensors. I have a devoted website and YouTube channel where I post various hardware repair videos or instructional videos for many of my electronics projects. Each project has a devoted webpage where I post the instructional videos along with written procedures and other information relating to the project. Videos from “Robotic Arm Repair” to a “DIY SEGA Game Gear Flash Cartridge” project. I even have VHDL software tutorials.

The last project I shared on my website was a project to help students dive into a VHDL based VGA Pong game using the Altera DE1 development board.