Home » An Engineer Who Retires to the Garage

Jerry Brown, of Camarillo, CA, retired from the aerospace industry five years ago but continues to consult and work on numerous projects at home. For example, he plans to submit an article to Circuit Cellar about a Microchip Technology PIC-based computer display component (CDC) he designed and built for a traffic-monitoring system developed by a colleague. 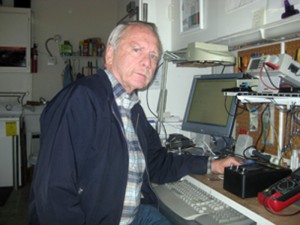 Jerry Brown sits at his workbench. The black box atop the workbench is an embedded controller and part of  his traffic monitoring system project.

“The traffic monitoring system is composed of a beam emitter component (BEC), a beam sensor component (BSC), and the CDC, and is intended for unmanned use on city streets, boulevards, and roadways to monitor and record the accumulative count, direction of travel, speed, and time of day for vehicles that pass by a specific location during a set time period,” he says.

Brown particularly enjoys working with PWM LED controllers. Circuit Cellar editors look forward to seeing his project article. In the meantime, he sent us the following description and pictures of the space where he conceives and executes his creative engineering ideas. 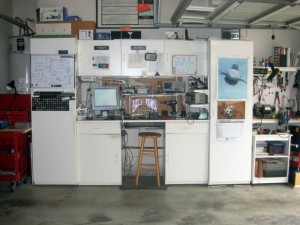 My workspace, which I call my “lab,” is on one side of my two-car garage and is fairly well equipped. (If you think it looks a bit messy, you should have seen it before I straightened it up for the “photo shoot.”)

I have a good supply of passive and active electronic components, which are catalogued and, along with other parts and supplies, are stored in the cabinets and shelves alongside and above the workbench. I use the computer to write and compile software programs and to program PIC flash microcontrollers.

The photos show the workbench and some of the instrumentation I have in the lab, including a waveform generator, a digital storage oscilloscope, a digital multimeter, a couple of power supplies, and a soldering station.

The black box visible on top of the workbench is an embedded controller and is part of the traffic monitoring system that I have been working on. 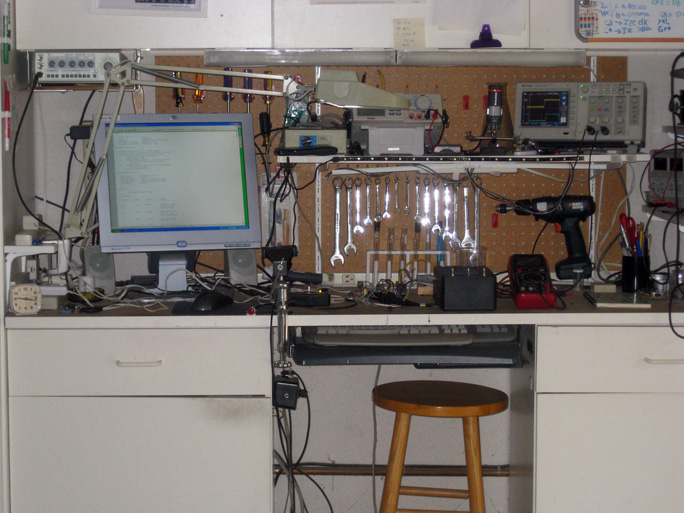 Instruments in Brown’s lab include a waveform generator, a digital storage oscilloscope, a digital multimeter, a couple of power supplies, and a soldering station.

Brown has a BS in Electrical Engineering and a BS in Business Administration from California Polytechnic State University in San Luis Obispo, CA. He worked in the aerospace industry for 30 years and retired as the Principal Engineer/Manager of a Los Angeles-area aerospace company’s electrical and software design group.

An Engineer Who Retires to the Garage