Home » A Workspace for “Engineering Magic” 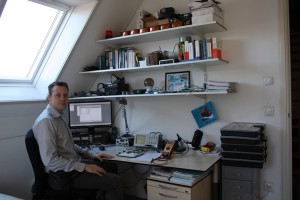 Photo 1—Brandsma describes his workspace as his “little corner where the engineering magic happens.”

Sjoerd Brandsma, an R&D manager at CycloMedia, enjoys designing with cameras, GPS receivers, and transceivers. His creates his projects in a small workspace in Kerkwijk, The Netherlands (see Photo 1). He also designs in his garage, where he uses a mill and a lathe for some small and medium metal work (see Photo 2). 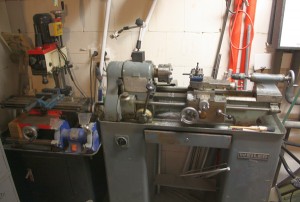 The Weiler lathe has served me and the previous owners for many years, but is still healthy and precise. The black and red mill does an acceptable job and is still on my list to be converted to a computer numerical control (CNC) machine.

Brandsma described some of his projects. 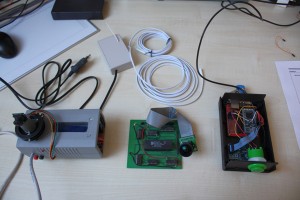 Photo 3—Some of Brandsma’s projects include an mbed-based camera project (left), a camera with an 8-bit parallel databus interface (center), and an MP3 player that uses a decoder chip that is connected to an mbed module (right).

I built a COMedia C328 UART camera with a 100° lens placed on a 360° servomotor (see Photo 3, left).  Both are connected to an mbed module. When the system starts, the camera takes a full-circle picture every 90°. The four images are stored on an SD card and can be stitched into a panoramic image. I built this project for the NXP mbed design challenge 2010 but never finished the project because the initial idea involved doing some stitching on the mbed module itself. This seemed to be a bit too complicated due to memory limitations.

I built this project built around a 16-MB framebuffer for the Aptina MT9D131 camera (see Photo 3, center). This camera has an 8-bit parallel databus interface that operates on 6 to 80 MHz. This is way too fast for most microcontrollers (e.g., Arduino, Atmel AVR, Microchip Technology PIC, etc.). With this framebuffer, it’s possible to capture still images and store/process the image data at a later point.

This project involves an MP3 player that uses a VLSI VS1053 decoder chip that is connected to an mbed module (see Photo 3, right). The great thing about the mbed platform is that there’s plenty of library code available. This is also the case for the VS1053. With that, it’s a piece of cake to build your own MP3 player. The green button is a Skip button. But beware! If you press that button it will play a song you don’t like and you cannot skip that song.

He continued by describing his test equipment. 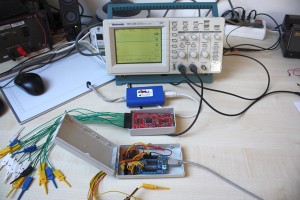 The red PCB is a Seeed Technology 16-channel Open Workbench Logic Sniffer (see Photo 4, second from bottom). This is actually a really cool low-budget open-source USB logic analyzer that’s quite handy once in a while when I need to analyze some data bus issues.

The board on the bottom is a Cypress CY7C68013A USB microcontroller high-speed USB peripheral controller that can be used as an eight-channel logic analyzer or as any other high-speed data-capture device (see Photo 4, bottom). It’s still on my “to-do” list to connect it to the Aptina MT9D131 camera and do some video streaming.

Brandsma believes that “books tell a lot about a person.” Photo 5 shows some books he uses when designing and or programming his projects. 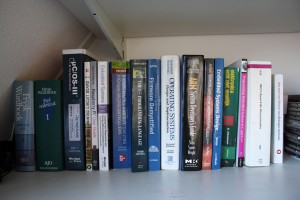 Photo 5—A few of Brandsma’s “go-to” books are shown.

The technical difficulty of the books differs a lot. Electronica echt niet moeilijk (Electronics Made Easy) is an entry-level book that helped me understand the basics of electronics. On the other hand, the books about operating systems and the C++ programming language are certainly of a different level.

A Workspace for “Engineering Magic”

Resources A Quiet Place for Soldering and Software Design