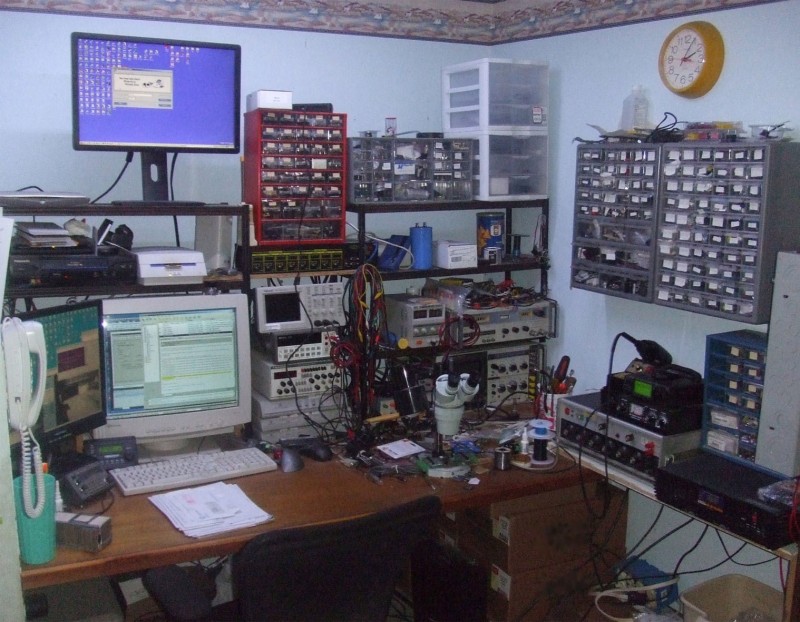 It’s a home basement workspace that reflects a variety of projects and clients. “I do a range of design work, from transistor-level hardware design through microcontrollers and FPGAs, as well as the embedded firmware and PC-side software to run the products,” Hendrix says. “Most of my clients are small to medium businesses in northeast Ohio, although I’ve done designs for companies as far west as New Mexico, as far south as Florida, and as far east as Cypress.”

Hendrix describes a workspace layout that stresses utility and a certain attention to thriftiness:

He provides the following detailed description of his equipment and desk, which is a very large, solid-core door purchased cheaply from a lumberyard because it had been damaged:

Being natural wood and not plastic, it makes an inherently anti-static workstation. I used a router to round the front edge to be a bit friendlier to elbows, and carefully trimmed it and wedged it between the wall on the right and the utility room wall on the left, supported by vertical plywood against the walls. My PCs are in the adjacent utility room so I don’t have to listen to fans all day and they’re up on custom brackets on the wall so I don’t have to shinny under the desk to get to them. All the wires pass through plumbing fittings in the wall. The main work computer runs the lower dual monitors. The next-older work computer is still used for some specialized hardware, via the monitor above and an extra mouse. Under the left monitor is an all-band receiver that I sometimes use to monitor equipment under development, but also listen to broadcast music.

My late father-in-law was always extremely thrifty, and salvaged the flatbed scanner at the top left from a dumpster. It’s turned out to be the best scanner I’ve seen, and I used it to scan their family pictures. There’s also an HP Photosmart scanner that’s excellent on slides and negatives.

The middle stack has a parts cabinet that I really should retire, holding mainly SN74 series dual in-line packages (DIPs) that I very rarely use these days. Below that is an Ethernet-enabled power switch that controls various equipment. Next down is my trusty old Tektronix TDS-220 oscilloscope

I was pleased to note that past contributors to [Circuit Cellar’s Workspace feature] also use that same scope. It was the first digital scope I ever encountered that wouldn’t fib to me about aliasing, and it’s still a real workhorse. The ability to do screen captures with the free PC software helps a lot in documenting a finished product and in discussing problems remotely. Below that is a very solid bench multimeter. If it just had a capacitance function, I could abandon my Fluke 12! Then there’s a basic analog function generator, and some manual switches for AC.

Over on the far right are some more parts cabinets, several power supplies (including the ±5V/±12V supply my dad helped me build during my very first excursions into the then-new SN74 series of logic), an RF signal generator, and a good old boat-anchor Hewlett-Packard (HP) spectrum analyzer. I got that one off eBay, and spent as much again to get it repaired and calibrated. It’s in many ways better than the newer instruments. If it had a synthesized local oscillator and a computer interface, it would do it all. Actually, I have on occasion faked a computer interface by connecting the video outputs on its front panel to my TDS-220, and then capturing the resulting waveform.

In front of that is my solder station and stereo zoom microscope. Sitting on its stage is a backup prototype identical to the one currently controlling 4,800 W of my total 6,800 W of installed solar capacity. I routinely do prototypes using 0603 parts and recently more 0402 parts, with occasional 0201 parts. Don’t sneeze around those! The cabinets on the right wall are mainly connectors and surface-mount parts.

I needed some more bench space for a project, so I added a “temporary” shelf between the right end of my bench and the bookshelves on the wall to the right. As you can imagine, the “temporary” part of that wasn’t. So now it holds a voltage standard, on which sits my solder station and a ham radio. The latter is powered directly by 12-V solar power. At the extreme right are an inverter connected to the same solar batteries and the side of a breaker panel that allows me to safely connect to those same batteries when I need a heavy-duty 12-V power supply.

The whole office is lighted by strips of white LEDs run directly by 12-V solar power. The self-adhesive strips are just stuck to the drop-ceiling rails on each side of the standard florescent fixture. The standard fixture is still present and functional as a backup, but the solar lights are actually brighter and don’t flicker like a florescent. The 12-V solar is also wired to the rear jacks of the HP multimeter, so I can get an instant reading on the battery charge state. I have future plans to move some or all of my office circuits to the 120 VAC solar power that runs a portion of our home.

To the right and out of the picture is a solid wall of bookshelves that I built to hold databooks when I first set up this office over 20 years ago. The Internet and PDFs have pretty much made that obsolete, so those shelves now hold various supplies, projects in various states of completion, and some archival data. Behind me as I take this picture is a long table, made of another big door sitting atop filing cabinets. My original intent was for the desk to be for software/firmware, and the long table to be for hardware. Indeed, there are still a couple of RS-232 lines up through the ceiling and down to the table. However, now it serves as an assembly area when I have contractors doing assembly, as well as for storage and general workspace. But there’s Ethernet available on both the desk and the bench, for connecting Ethernet-enabled prototypes.

The biggest drawback to this office comes on a clear, cold, sunny day. The upstairs has lots of glass, so it absorbs lots of free solar heat. However, that means the furnace doesn’t run at all (even near zero outside), so the office and the rest of the basement get really cold. But since the furnace blower is on solar power, which is abundant under those conditions, I just force the blower on to share some of that heat!

If you’re interested in learning more about Hendrix’s work, check out our member profile posted last year. Also, be sure to pick up Circuit Cellar‘s upcoming July and August issues, which will include Hendrix’s two-part series on his personal solar-power setup. 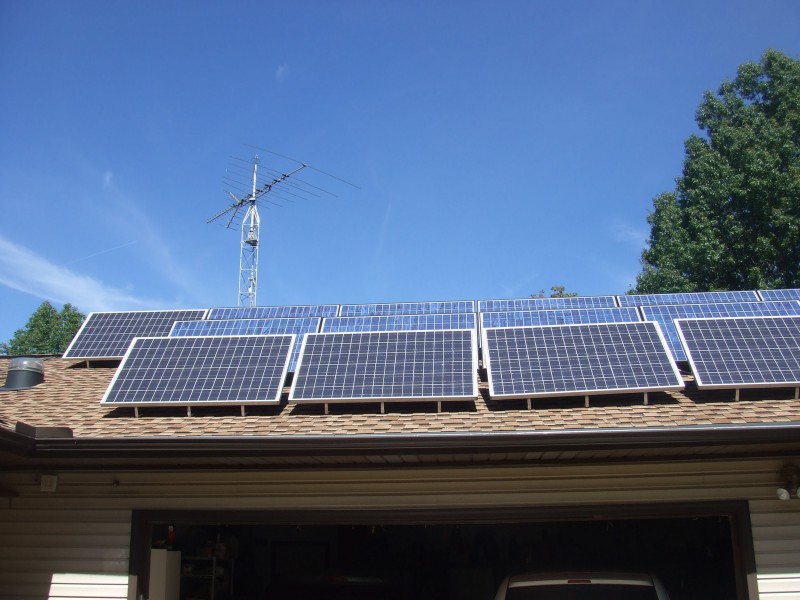 These solar panels are mounted on Steve’s east-facing roof.