Our enthusiasm for bright and clean workspaces won’t wane. A tidy, well-lit space is a must-have for a designer working with microcontrollers, PCBs, and small components such as transistors and capacitors. Fergus Dixon’s Sydney, Australia-based workspace is an excellent example. 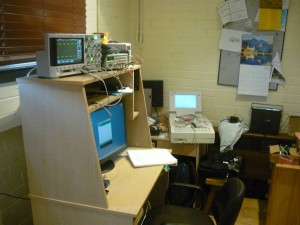 Dixon submitted the following information about his workspace:

The tools I use include an oscilloscope, function generator, variable DC power supply and desoldering tool. The Oscilloscope is a new Agilent DSP-X 3014A which replaces the old Tektronix TDS210 which lasted for 12 years. I looked into the Chinese Rigol scopes, but while they are value for money, opted to go for a high-end scope. The function generator is a cheap one with an annoying mains hum, and the DC supply is a GPS-3030D which has been going well for over ten years, and another would be useful. The desoldering tool is a Hakko 701 which needs to be replaced with a hot-air gun soon for small SMD work. The workspace has a workbench for assembly of prototypes and a desk. The major issue is being able to store all the parts in a logical way – the new yellow boxes work well with pullout trays for small SMD parts. There are a few new projects this month including an energy meter which is better than the rest and electric fence energizers for farms. Reverse engineering projects are the hardest and most rewarding since you pick up experience from other engineers and see different methods of building circuits. 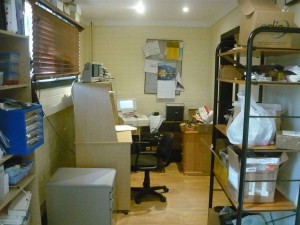 A narrow workspace can be useful when moving to and from equipment and tools  (Source: F. Dixon) 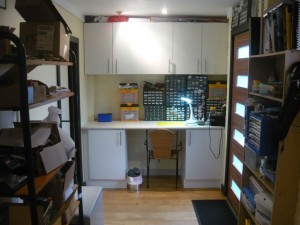 Dixon is the Chief Technical Officer at Electronic System Design (ESD), which he started to provide hardware and software engineering services to clients. After completing one of ESD’s recent projects for a client, Dixon published an article titled “Smart Switch Management: Construct and MCU-Based, Net-Enabled Controller” in Circuit Cellar 263 (June 2012).

The following excerpt is the introduction to his article about the switch controller.

“Mate, we have a new project for you you’ll like this one,” said my pal from the contract assembly company. New projects are often referred to contract assembly companies and printed circuit board (PCB) designers, so it pays to be on good terms with them. This project was to design a controller for up to 50 smart switches. Smart switches are energy-saving devices installed in office blocks to automatically turn off the lights at the end of the day to conserve energy. The controller needed an accurate real-time clock (RTC) that would pulse a 24-V AC line once or twice to turn off the smart switches at the end of the working day, and repeat at two- to three-hour intervals in case the lights were turned on. After the first prototype was finished, the Ethernet interface was added.

The first prototype featured a Microchip Technology ENC28J60 Ethernet chip on a Vero board. 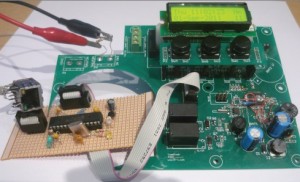 You can read the entire article in the June 2012 issue.

Share your space! Circuit Cellar is interested in finding as many workspaces as possible and sharing them with the world. Email editor at circuitcellar.com to submit photos and information about your workspace. Write “workspace” in the subject line of the email, and include info such as where you’re located (city, country), the projects you build in your space, your tech interests, your occupation, and more. If you have an interesting space, we might feature it on CircuitCellar.com!