Arduino is an open-source development kit with a cult following. Open source means the software and hardware design files are available for free download. This begs the question of how the Arduino team can turn a profit, and the answer is the trademark and reputation of the Arduino name and symbol. 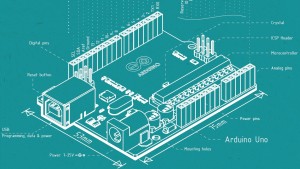 While there are now many Arduino clones, the original Arduino boards still outperform most. Arduino is very useful for prototyping. A recent example in my own work is adding a gyroscope sensor to a project. First, I purchased a gyroscope board from Pololu for a small amount. I plugged it into an Arduino breadboard shield purchased from eBay for roughly $5, and wired up the four pins: VCC (3.3 V), GND, SCL, and SDA. Pololu’s website has a link to some demo firmware and I downloaded this from GitHub. The library folders were extracted and renamed according to the instructions and then the example was run. The Arduino serial monitor then showed the gyroscope data in real-time, and the entire process took no more than 30 minutes.

Editor’s note: This EE Tip was written by Fergus Dixon of Sydney, Australia. Dixon runs Electronic System Design, a website set up to promote easy to use and inexpensive development kits. The Arduino Uno pictured above is a small portion of a full Arduino blueprint poster available for free download here.

Fergus Dixon (fdixon@sr-i.com) holds a BE from Sydney University. After working for 12 years in various fields such as packaging, mining, and medical and control systems, he set up his own company, SRI, to do custom electronic designs. After 14 years (and two Australian design marks), Fergus now runs several businesses including Electronic System Design and Shields for Arduino. He spends most of his spare time maintaining and improving the popular program “Simulator for Arduino.”