Local Positioning System (LPS) and GPS (not just the US system) both use several transmitters to enable a receiver to calculate its geographical position. Several techniques are possible, each with its advantages and drawbacks. The important thing in all these techniques is the notion of a direct path (line of sight, or LoS). In effect, if the transmitter signal has not taken the shortest path to the receiver, the distance between them calculated by the receiver will be incorrect, since the receiver does not know the route taken by the radio signal.

Three mathematical techniques are usually used for calculating the position of a receiver from signals received from several transmitters: triangulation, trilateration, and multilateration. The last two are very similar, but should not be confused.

Triangulation (Figure 1) is a very ancient technique, said to date from over 2,500 years ago, when it was used by the Greek philosopher and astronomer Thales of Miletus to measure (with surprising accuracy) the radius of the Earth’s orbit around the Sun.

Figure 1—Triangulation: you are at A, from where you can see B and C. If you know their geographical positions, you can find your own position with the help of a compass.

It allows an observer to calculate their position by measuring two directions towards two reference points. Since the positions of the reference points are known, it is hence possible to construct a triangle where one of the sides and two of the angles are known, with the observer at the third point. This information is enough to defi ne the triangle completely and hence deduce the position of the observer.

Using triangulation with transmitters requires the angle of incidence (angle of arrival, or AoA) of a radio signal to be measured. This can be done using several antennas placed side by side (an array of antennas, for example, Figure 2) and to measure the phase difference between the signals received by the antennas. 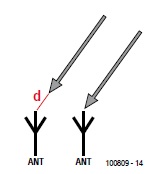 Figure 2—An antenna array makes it possible to measure the angle of incidence of a radio signal, and hence its direction.

If the distance between the antennas is small, the incident front of the signal may be considered as straight, and the calculation of the angle will be fairly accurate. It’s also possible to use a directional antenna to determine the position of a transmitter. The antenna orientation producing the strongest signal indicates the direction of the transmitter. All you then have to do is take two measurements from known transmitters in order to be able to apply triangulation. 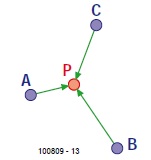 Figure 3—The length of the arrows corresponds to the arrival time at receiver P of the signals broadcast by three transmitters A, B, and C. It forms a measurement of the distances between the transmitters and the receiver.

Thus, when receiving a signal from a single transmitter, we can situate ourselves on a circle (for simplicity, let’s confi ne ourselves to two dimensions and ideal transmission conditions) with the transmitter at the center. Not very accurate. It gets better with two transmitters — now there are only two positions possible: the two points where the circles around the two transmitters intersect. Adding a third transmitter enables us to eliminate one of these two possibilities (Figure 4).

Figure 4—2-D trilateration. In 3-D, another transmitter has to be added in order to determine a position unambiguously.

When we extend trilateration to three dimensions, the circles become spheres. Now we need to add one more transmitter in order to fi nd the position of the receiver, as the intersection of two spheres is no longer at two points, but is a circle (assuming we ignore the trivial point when they touch). This explains why a GPS needs to “see” at least four satellites to work.

Using a single receiver listening to the signals (pulses, for example) from two synchronized transmitters, it is possible to measure the difference between the arrival times (time difference of arrival, or TDoA) of the two signals at the receiver. Then the principle is similar to trilateration, except that we no longer fi nd ourselves on a circle or a sphere, but on a hyperbola (2D) or a hyperboloid (3D). Here too, we need four transmitters to enable the receiver to calculate its position accurately.

Resources A Quiet Place for Soldering and Software Design