The world’s best engineers have one thing in common: they’re always learning from their mistakes. We asked Niagara College professor and long-time contributor Mark Csele about his biggest engineering-related mistake. He responded with the following interesting insight about testing under real conditions. 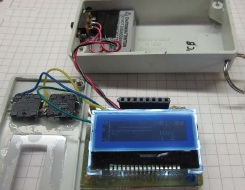 Mark Csele’s complete portable accelerometer design, which he presented in Circuit Cellar 266. with the serial download adapter. The adapter is installed only when downloading data to a PC and mates with an eight pin connector on the PCB. The rear of the unit features three powerful
rare-earth magnets that enable it to be attached to a vehicle.

Trusting simulation (or, if you prefer, lack of testing under real conditions). I wrote the firmware for a large three-phase synchronous control system. The code performed amazingly well in the lab, and no matter what stimulus was applied, it always produced correct results. When put into operation in the field (at a very large industrial installation), it failed every 20 minutes or so, producing a massive (and dangerous) step-voltage output! I received a call from a panicked engineer on-site, and after an hour of diagnosis, I asked for a screenshot of the actual power line (which was said to be “noisy,” but we knew this ahead of time) only to be shocked at how noisy. Massive glitches appeared on the line many times larger than the AC peak and crossing zero several times, causing no end of problems. Many hours later (the middle of the morning), the software was fixed with a new algorithm that compensated for such “issues.” This was an incredibly humbling experience: I wasn’t nearly as smart as I had thought, and I really missed the boat on testing. I tested the system under what I thought were realistic conditions, whereas I really should have spent time investigating what the target grid really looked like.—Mark Csele, CC25 (anniversary issue)