All solar cells are made from at least two different materials, often in the form of two thin, adjacent layers. One of the materials must act as an electron donor under illumination, while the other material must act as an electron acceptor. If there is some sort of electron barrier between the two materials, the result is an electrical potential. If each of these materials is now provided with an electrode made from an electrically conductive material and the two electrodes are connected to an external load, the electrons will follow this path. 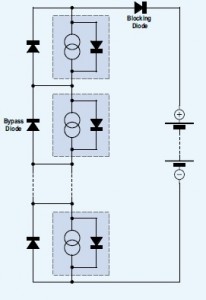 The most commonly used solar cells are made from thin wafers of polycrystalline silicon (polycrystalline cells have a typical “frosty” appearance after sawing and polishing). The silicon is very pure, but it contains an extremely small amount of boron as a dopant (an intentionally introduced impurity), and it has a thin surface layer doped with phosphorus. This creates a PN junction in the cell, exactly the same as in a diode. When the cell is exposed to light, electrons are released and holes (positive charge carriers) are generated. The holes can recombine with the electrons. The charge carriers are kept apart by the electrical field of the PN junction, which partially prevents the direct recombination of electrons and holes.

The electrical potential between the electrodes on the top and bottom of the cell is approximately 0.6 V. The maximum current (short-circuit current) is proportional to the surface area of the cell, the impinging light energy, and the efficiency. Higher voltages and currents are obtained by connecting cells in series to form strings and connecting these strings of cells in parallel to form modules.

The maximum efficiency achieved by polycrystalline cells is 17%, while monocrystalline cells can achieve up to 22%, although the overall efficiency is lower if the total module area is taken into account. On a sunny day in central Europe, the available solar energy is approximately 1000 W/m2, and around 150 W/m2 of this can be converted into electrical energy with currently available solar cells. 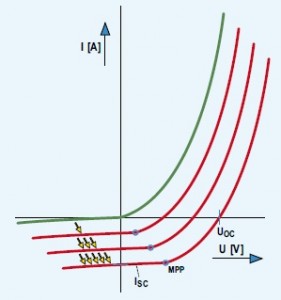 Cells made from selenium, gallium arsenide, or other compounds can achieve even higher efficiency, but they are more expensive and are only used in special applications, such as space travel. There are also other approaches that are aimed primarily at reducing costs instead of increasing efficiency. The objective of such approaches is to considerably reduce the amount of pure silicon that has to be used or eliminate its use entirely. One example is thin-film solar cells made from amorphous silicon, which have an efficiency of 8 to 10% and a good price/performance ratio. The silicon can be applied to a glass sheet or plastic film in the form of a thin layer. This thin-film technology is quite suitable for the production of robust, flexible modules, such as the examples described in this article.

From an electrical viewpoint, an ideal solar cell consists of a pure current source in parallel with a diode (the outlined components in the accompanying schematic diagram). When the solar cell is illuminated, the typical U/I characteristic of the diode shifts downward (see the drawing, which also shows the opencircuit voltage UOC and the short-circuit current ISC). The panel supplies maximum power when the load corresponds to the points marked “MPP” (maximum power point) in the drawing. The power rating of a cell or panel specified by the manufacturer usually refers to operation at the MPP with a light intensity of 100,000 lux and a temperature of 25°C. The power decreases by approximately 0.2 to 0.5 %/°C as the temperature increases.

If the battery is connected directly to the solar panel, a small leakage current will flow through the solar panel when it is not illuminated. The can be prevented by adding a blocking diode to the circuit (see the schematic). Many portable solar modules have a built-in blocking diode (check the manufacturer’s specifications).

This simple arrangement is adequate if the maximum current from the solar panel is less than the maximum allowable overcharging current of the battery. NiMH cells can be overcharged for up to 100 hours if the charging current (in A) is less than one-tenth of their rated capacity in Ah. This means that a panel with a rated current of 2 A can be connected directly to a 20-Ah battery without any problems. However, under these conditions the battery must be fully discharged by a load from time to time.

When positioning a solar panel, you should ensure that no part of the panel is in the shade, as otherwise the voltage will decrease markedly, with a good chance that no current will flow into the connected battery.

Most modules have integrated bypass diodes connected in reverse parallel with the solar cells. These diodes prevent reverse polarization of any cells that are not exposed to sunlight, so the current from the other cells flows through the diodes, which can cause overheating and damage to the cells. To reduce costs, it is common practice to fit only one diode to a group of cells instead of providing a separate diode for each cell.