So, the eleventh harmonic would be one-eleventh as strong as the fundamental frequency. This corresponds to a decline in harmonic amplitude of 20 dB per decade.

Real time clocks are not perfect square waves, and pulses do not have infinitely fast rise times. As a result, the higher harmonics of any real waveform start dropping faster than 1/n at higher frequencies, generally dropping as 1/(n2), or 40 dB per decade, after the frequency is high enough.

You can see this in Figure 1. The antenna efficiency of PC board structures or cables increases 20 dB per decade as frequency increases and wavelength gets shorter and closer to the size of structures found on typical PC boards. 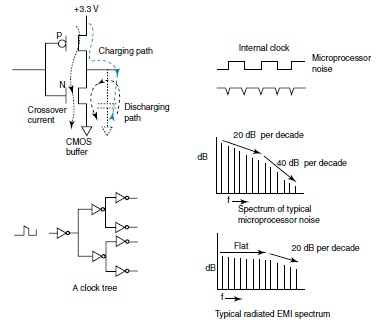 Figure 1: Here you can see the sources of EMI in a typical microprocessor and the resulting spectrum.

As a result, the beginning part of the radiated spectrum tends to be uniform, the 20 dB per decade decline in harmonic strength being balanced by the 20 dB per decade increase in antenna efficiency, until a high enough frequency is reached where the curve takes a bend and harmonics start declining at 40 dB per decade zone (see Figure 1).

Above this frequency, the radiated spectrum starts declining by 20 dB per octave. But, the amplitudes of the real harmonics of a real device are often quite irregular because of resonances that weaken some and reinforce others.

What is not usually understood is that the biggest source of EMI is not the clock directly, but a train of pulses generated on both edges of the clock when current surges into the microprocessor for a nanosecond or two when the clock transitions up or down. This pulse train has a frequency that’s double the clock frequency. It seeps out of the processor chip into the power supplies and generally infects the board with high-frequency EMI. It also gets into the output lines emanating from the processor package; therefore, it’s further spread around the board and to cables and devices connected to the board.

The current surges on both clock edges are related to the clock tree. The clock tree is a system consisting of a branching network of buffers that distribute the internal clock around the silicon die. Because these buffers drive considerable capacitance and have both polarities of the clock present, there is a surge of current on both edges of the clock. This occurs as current flows into the chip to charge up the capacitance in the part of the clock tree that is transitioning from 0 V to the power supply voltage. On-chip devices, such as flip-flops, also contain internal gates and buffers where both polarities of the clock are present and contribute to the current surge.

An additional current surge is related to the crossover current when both the N and P transistors in a CMOS buffer are momentarily conducting during a logic transition. The silicon chip tries to suck in the required current to service these fast transients through its power supply pins. However, these connections have inductance created by the bond wires and lead frame, so the voltage drops briefly on the die, creating an on-chip power supply voltage drop with an amplitude on the order of a few tenths of a volt and the duration of a nanosecond or so.

The amplitude of the harmonics of the periodic noise pulses, at least at lower frequencies, declines inversely with frequency (1/f). Unfortunately, the effectiveness of a short antenna, such as a PC board trace, increases directly with frequency (~f). The result is that the radiated EMI tends to be flat across the spectrum.

Fortunately, the amplitude of the harmonics starts declining more rapidly than 1/f; it’s more like 1/(f2) at some higher frequency determined by the finite rise time of the pulses in the pulse train. The balance of these countervailing effects is such that the most trouble is often found in the area of 100 to 300 MHz for lower-speed 8- and 16-bit microprocessor boards.

Decoupling capacitors and the intrinsic capacitance of the power and ground planes can be used to short circuit or filter noise on the power supply. However, this technique loses effectiveness above 100 MHz, because the decoupling capacitors have inductance of about 1 nH, giving an effective resistance of about 0.5 Ω at 200 MHz. The large currents involved will develop millivolt-level voltages across such capacitors.

The problem of noise on the I/O lines of a processor can be addressed with two sets of power supply pins. One set is used for the processor core; the other is for the output drivers that are located in the I/O ring on the periphery of the die (see Figure 2). 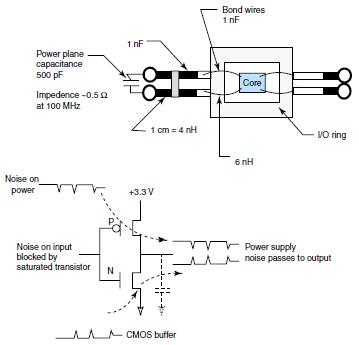 Figure 2: The connection of separate power and ground pins for the core and I/O ring
of a processor is shown here. A PC board filter blocks core noise from power planes.
You can also see how I/O buffers spread power supply noise.

If the I/O buffers are supplied with the same power that is made dirty by the fast transients in the processor core, every output pin of the processor will spread EMI. The EMI that tries to come out of the power pins for the core can be blocked by a combination of decoupling capacitors and PC board trace inductance. This keeps the PC board power planes a relatively clean source of power for the processor I/O ring. The design team figured this feature decreases EMI amplitudes by 10 dB, which is a factor of three in EMI electrical field strength measured by the prescribed calibrated antenna. This is a lot because it’s common to flunk the tests by 5 dB.

Most microprocessors have I/O and memory devices connected to the same bus with distinct control signals for the devices. Generally, there is a lot more activity at a higher frequency for the memory devices. For instance, a Digi International Rabbit 3000 microprocessor has an option to use separate pins for memory and I/O devices, both address and data. The advantage is that the physical scope of the high-speed memory bus is limited to the memory devices. A separate address and data bus handles I/O cycles and has a much lower average operating frequency. In particular, the address lines toggle only during I/O bus cycles, greatly limiting the emissions from the I/O bus. This avoids the situation where the fast-toggling address and data lines of the memory bus have to be run all over the printed circuit board of a large system. This scheme also limits the capacitive loading on the memory bus, which does not have to extend to numerous I/O devices.

A line spectrum is the spectrum generated by a square wave clock or by a train of short pulses. All of the energy is concentrated in a narrow spectral line at the harmonic frequencies.

When the FCC EMI measurement tests are performed, the spectrum analyzer measures the amplitude of the signal from a 120-kHz wide filter that is swept across the frequencies of interest. With a line spectrum, all of the energy in a single line passes through the filter, resulting in a strong signal. If the energy in the line could be spread out over a wider frequency, say 5 MHz, only one-fortieth the energy would pass through the 120-kHz wide filter, considerably reducing the reading (by 16 dB in amplitude for one fortieth of the energy). This is what a clock spectrum spreader does. It modulates the clock frequency by a little so as to smear out the spectral line in frequency.

The idea to do this for the purpose of reducing EMI was patented by Bell Labs in two patents during the 1960s. There are numerous ways to modulate the clock frequency. One method is to use a voltage-controlled oscillator and phase-lock loop so that the frequency sweeps back and forth at a low modulation rate (e.g., 50 kHz).

Another method is to insert random delays or dithers into the clock. These methods are all covered in the original Bell Labs patents. The Bell Labs people were probably interested in EMI because telephone switches involve a large amount of equipment in a small space. In addition, it’s conceivable that the early computerized switches suffered from EMI problems. We installed a clock spectrum spreader in the Rabbit 3000 based on a combination of digital and analog techniques. The spectrum spreader reduces FCC-style EMI readings by around 20 dB, which is a lot.

A control system makes sure that the modulated clock edge is never in error by more than 20 ns compared to where the clock edge would be if it were not modulated. This prevents disruption in serial communications or other timing functions. For example, a UART operating at 460,000 bps can tolerate about 500 ns of clock edge error before it will be near to generating errors. This is far less than our 20-ns worst error in clock edge position.—Circuit Cellar 146, Norman Rogers, “Killing the EMI Demon,” 2002.

This piece originally appeared in Circuit Cellar 146, 2002. Author: Norman Rogers, who was President of ZWorld, Inc. and Rabbit Semiconductor.