Home » How To Measure Temperature with a Soldering Iron

There are many applications that involve the conversion of electric current into heat by means of a heating element with some degree of temperature control. Hot water boilers, kettles, and irons are typical examples. In this article, I’ll explain how you can eliminate the need for a temperature sensor by using the heating element itself to accurately measure temperature. 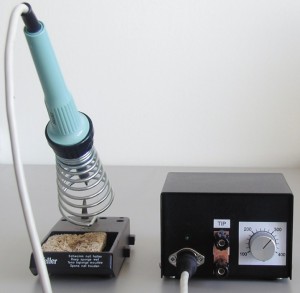 The finished soldering station. Think of it as a heating element turned temperature sensor.

I appreciate that electronics enthusiasts don’t necessarily want to read about cooking and ironing. So, I’ll describe a device you might be more comfortable thinking about: a soldering iron. All of the aforementioned appliances and tools have one important thing in common that makes them different from, say, a hair dryer. Any thoughts?

The important common factor is that the thermal resistance between the heating element and the heated medium is much lower than the thermal resistance between the medium and the ambient world. Thus, if electric current stops flowing through the heating element, the temperatures of the element and the medium will equalize long before the medium loses much of its temperature via heat radiation and conduction.

First, you turn on the heating element for a while. Then, switch it off and wait for the temperatures to equalize. After that, you must measure the resistance and calculate the temperature. And then do it again: switch on, switch off, measure, and so on. It’s easy to see why this approach wouldn’t work with a hair dryer. The air forced through a hair dryer moves quickly and has poor heat conductivity.

I can hear you asking the obvious questions. How difficult is it to measure the element resistance? How much does it change with temperature? Wouldn’t a simple sensor be cheaper and easier to use? It depends on the application. I will address these concerns as I describe the soldering iron example.

The schematic below shows Malik’s complete application. The power supply is the only part not shown in the schematic of the soldering station. The current source is powered
by 8 V to reduce power dissipation.

In the measurement circuit, the current source is built from an adjustable linear regulator. The current is set to a little higher than 200 mA. The main power switch Q1 is connected to an additional transistor circuit to translate the control voltages down to the 0- to 5-V range the Freescale MC68HC908QT4 microcontroller is capable of generating. 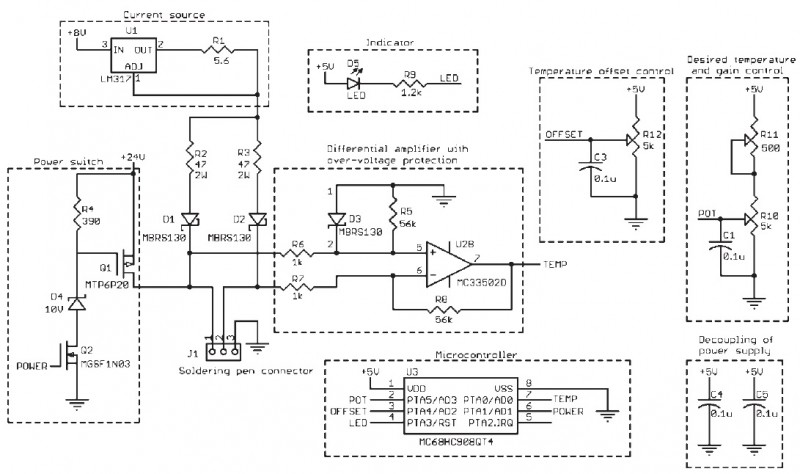 The complete application, without the power supply

The MC68HC908QT4 microcontroller is an inexpensive 8-bit HC08 device housed in an eight-pin DIL package that’s easy to work with. The microcontroller is connected to an LED that indicates whether the soldering tip is below, equal to, or above the desired temperature. A potentiometer regulates the desired temperature. The remaining pieces of the circuit are two trimmers that are used to calibrate the offset and gain of the temperature regulation.

A schematic of the power supply I used isn’t shown here. I used a small, lightweight custom switch-mode power supply. However, the circuit will work equally well with a mains transformer-based power supply.

This temperature measurement application is very simple. As a result, the small amount of code for the ’HC908QT4 is little more than 700 bytes.

How To Measure Temperature with a Soldering Iron

EE Tips What Is Correlation?