You need a guitar amplifier to play an electric guitar. The guitar must be connected with a cable to the amplifier, which you might consider an inconvenience. Most guitar amplifiers operate off the AC power line. An electric guitar fitted with a small transmitter offers several advantages. You can make the guitar audible via an FM tuner/amplifier, for example. Both the connecting cable and amplifier are then unnecessary. With a portable FM broadcast radio or, if desired, a boombox, you can play in the street or in subway. 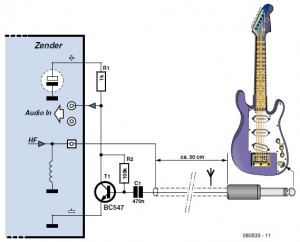 stations (like Billy Bragg). In that case, everything is battery-powered and independent of a fixed power point. (You might need a permit, though.)

Designing a transmitter to do this is not necessary. A variety of low-cost transmitters are available. The range of these devices is often not more than around 30′, but that’s likely plenty for most applications. Consider a König FMtrans20 transmitter. After fitting the batteries and turning it on, you can detect a carrier signal on the radio. Four channels are available, so it should always be possible to find an unused part of the FM band. A short cable with a 3.5-mm stereo audio jack protrudes from the enclosure. This is the audio input. The required signal level for sufficient modulation is about 500 mVPP.

If a guitar is connected directly, the radio’s volume level will have to be high to get sufficient sound. In fact, it will have to be so high that the noise from the modulator will be quite annoying. Thus, a preamplifier for the guitar signal is essential.

To build this preamplifier into the transmitter, you first have to open the enclosure. The two audio channels are combined. This is therefore a single channel (mono) transmitter. Because the audio preamplifier can be turned on and off at the same time as the transmitter, you also can use the transmitter’s on-board power supply for power. In our case, that was about 2.2 V. This voltage is available at the positive terminal of an electrolytic capacitor. Note that 2.2 V is not enough to power an op-amp. But with a single transistor the gain is already big enough and the guitar signal is sufficiently modulated. The final implementation of the modification involves soldering the preamplifier circuit along an edge of the PCB so that everything still fits inside the enclosure. The stereo cable is replaced with a 11.8″ microphone cable, fitted with a guitar plug (mono jack). The screen braid of the cable acts as an antenna as well as a ground connection for the guitar signal. The coil couples the low-frequency signal to ground, while it isolates the high-frequency antenna signal. While playing, the cable with the transmitter just dangles below the guitar, without being a nuisance. If you prefer, you can also secure the transmitter to the guitar with a bit of double-sided tape.

Clubs/Organizations The Transistor: Something for Every DIY-er