If your project needs a higher voltage rail than is already available in the circuit, you can use an off-the-shelf step-up device. But when you want a variable output voltage, it’s less easy to find a ready-made IC. However, it’s not complicated to build such a circuit yourself, especially if you have a microcontroller board that’s as easy to program as an Arduino. And this also lets you experiment with the circuit so you can get a better understanding of how it works. 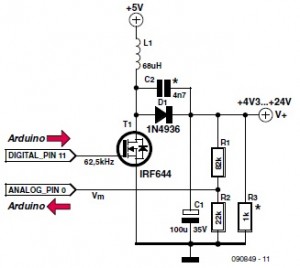 We don’t have enough space here to go into details about how this circuit works, but it’s worth mentioning a few points of special interest.

The small capacitor across the diode improves the efficiency of the circuit. The load is represented by R3. The components used make it possible to supply over 1 A (current limited by the MSS1260T 683MLB inductor from Coilcraft), but maximum efficiency (89%) is at around 95 mA (at an output voltage of 10 V). To avoid damaging the controller’s analog input (≤5 V), the output voltage may not exceed 24 V. For higher voltages, the values of resistors R1 and R2 would need to be changed.

The MOSFET is driven by the microcontroller, which is nothing but a little Arduino board. The Arduino’s default PWM signal frequency is around 500 Hz—too low for this application, which needs a frequency at least 100 times higher. So we can’t use the PWM functions offered by Arduino. But that’s no problem, as the Arduino can also be programmed in assembler, allowing a maximum frequency of 62.5 kHz (the microcontroller runs at 16 MHz). To sample the output voltage, a frequency of 100 Hz is acceptable, which means we can use Arduino’s standard timers and analog functions. The Arduino serial port is very handy: we can use it for sending the output voltage set point (5–24 V) and for collecting certain information about the operation. Thanks to the Arduino environment, it only took about half an hour to program.