Quantum mechanics notwithstanding, our world is analog. And so despite our fascination with everything digital, we need interfaces to provide bridges for our analog reality to cross over to the digital paradigm and then back again. One may ask: Is there a common denominator that binds these two worlds together regardless of their many conceptual differences? In my mind, it is grounding.

The fundamental rule for grounding is depicted in Figure 1. By “ground” I mean the common 0 V potential to which signals are referenced. The “chassis ground”, if grounding conductors had 0 Ω impedance, would also be 0 V—but, unfortunately, it never is. Yet there are still systems that are sufficiently insensitive to ground potential differences. They use the chassis for the signal and power returns. At one time, this was the way cars had been wired. 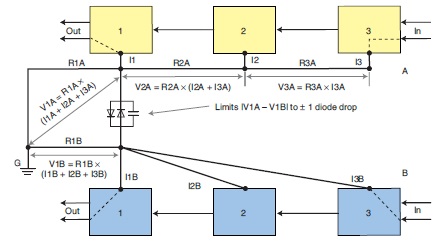 Figure 1: Botth sections, A and B, may be on the same PCB with separate ground planes (e.g., analog and digital). The diodes and the capacitor between the planes
limit potential differences due to ground bounce, etc. Broken lines inside boxes 1 and 3 indicate ground referenced, non-symmetrical inputs and outputs.

Figure 1a shows circuits sharing a common ground run. Notice that the output or the highest current drawing stage (1) must be the closest to the common point to minimize the voltage developed by that stage current over the grounding conductor. Also notice that the input signal and its return must be tied to the input block (3). Internal signal returns (grounds) are shown by broken lines. Returning inputs or outputs anywhere else would superimpose the noise from stages 1, 2, and 3 on the input signal. Figure 1b shows the approach often used in RF equipment. There is no sharing of grounds; they are all individually tied to a single point. Each circuit A and B can occupy its own PCB or they can be on a single PCB, their ground planes separate, such as analog and digital circuits. The grounds come together at the point G, where the chassis is also connected. Where there are a few inches of wire tying the individual grounds together, it is a good idea to insert fast signal diodes and a capacitor as shown between the separate ground runs. Any potential difference developed between the separate grounds due to finite impedance of wiring, as shown in Figure 1, will be attenuated and clamped by the three components. Note that the “capacitor” should in fact be a parallel combination of a number of capacitors, depending on the application, to guarantee performance across the spectrum. The following are typically used: 100 pF, 1 nF, 10 nF, 0.1 μF, and 1 μF.

In safety-critical systems such as aircraft comprising two or more subsystems enclosed in metal cabinets, such as shown in Figure 2, only currents from lightning or other interference suppressed by the EMC blocks is allowed to be returned to the chassis. 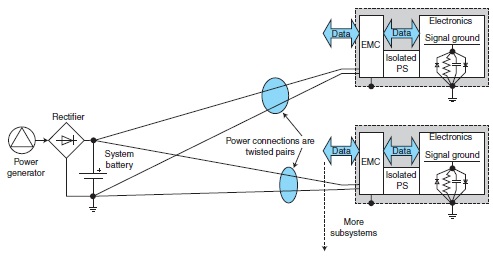 Power needs to be delivered by twisted pairs and all the returns connected to the chassis at a single point. If the signal grounds of the electronics are not allowed to be connected to the chassis, which depends on the system architecture, a combination of diodes, a capacitor, and a resistor as shown needs to be used to prevent ground loops as well as parasitic feedbacks between the electronics and the metal cabinet.

The subsystem enclosures shown with dotted lines connect to the chassis by mounting screws or straps. Most of today’s avionic equipment uses isolated power supplies. There is no galvanic connection between the power return and the internal signal ground to eliminate ground loops, yet the enclosures need to be connected to the internal grounds to eliminate parasitic feedbacks through capacitive coupling; but then they would create ground loops. Some system architectures require signals working with their own ground, isolated from the chassis, to prevent ground loops. To compensate for the parasitic capacitances existing due to the proximity of the metal enclosure to the components and the EMI/lightning protection, the resistor, capacitor, diode combination (as mentioned above) is used, with typical values of resistor about 10 kΩ and capacitance less than 10 μF. The capacitance is again a parallel combination of smaller capacitors to suppress the desired frequency spectrum.—George Novacek, “My Analog World: The Significance of Grounding,” Circuit Cellar 244, 2010.