The QuizWiz is an innovative hand-held device that teachers can use to score multiple choice tests. It’s unlikely that you’ll need such a device, but you’ll surely learn a lot from Paul Kiedrowski’s description of the design process. He covers the circuit design, hardware analysis, software, and more. 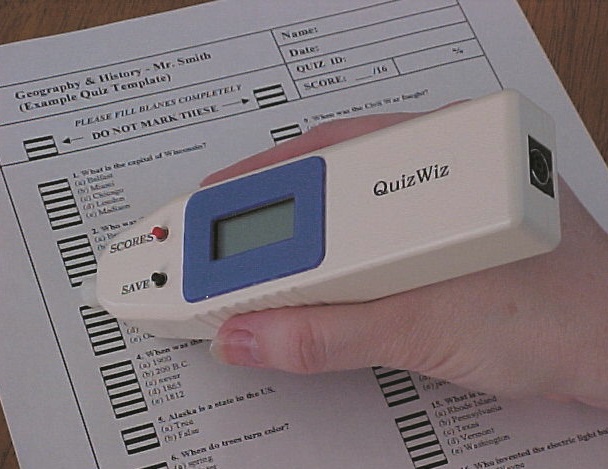 For automatic scoring of multiple choice tests, many schools use a commercially available system based on a desktop card reader machine, which requires that students mark their answers on preprinted forms of specific size and layout. This method is expensive because of the equipment and score cards, therefore usually it’s used only for critical testing.

In most cases, because only one centralized scoring machine is available to teachers, it is not located in the classroom where it would offer the most convenience. Perhaps more importantly, the most useful time to evaluate test results is immediately after a test so that feedback could be given and the missed questions discussed promptly. This is especially desirable for periodic quizzes where the intent is to allow the teacher to quickly gauge the classroom’s learning progress. What is needed is a better, lower cost, convenient way of quickly scoring quizzes.

To answer these needs, I developed a hand-held scoring device based on an 8-bit microprocessor I dubbed QuizWiz. The 87LPC764 is a new 20-pin offering that combines fast speed, 8051 code compatibility, and low cost. This processor is ideally suited for this project because of its 4K code space, power-saving modes, serial port, and remaining 16 I/O pins. Philips wanted to create a device simple to operate and affordable enough that every teacher could own one (see Photo 1).

QuizWiz has several features that make the teacher’s ability to score multiple-choice quizzes fast and easy. It reduces scoring time to only 10–15 s per page. It is capable of scoring tests printed on standard paper without preprinted forms, using a word-processing template.

QuizWiz does not require machine-assisted paper handling mechanisms. Also, as a hand-held device, it operates on three AAA batteries. The processor is inexpensive ($30 for parts) and measures only 6″ × 1.7″ × 1.0″. Simple to learn, the new teacher’s aid requires only two buttons to operate.

An eight-character by two-row LCD displays the status and results. There is a buzzer to provide distinctive audio feedback. QuizWiz has automatic power shutdown, providing a long life (estimated at >100 quiz sets). The flexible quiz format allows multiple columns and/or pages.

For your convenience, there is temporary memory storage of results during power shutdowns. Totals, per question and per quiz, are available. QuizWiz can handle eight choices per question, four columns of questions, and 32 questions per quiz. The processor provides an RS-232 serial connection for uploading results in real time to a PC, which allows tracking of which questions were missed per student. 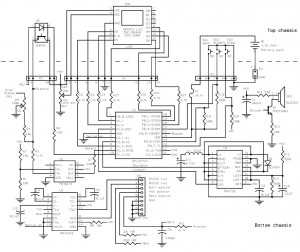 Figure 1 shows the circuitry has been partitioned by the two chassis sections. A PCB in the lower half contains most of the components, whereas the sensor tip, LCD, and battery compartment are in the upper half. The processor was DIP socketed for the development phase (see Photo 2). 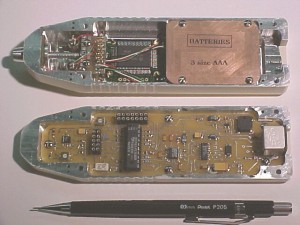 Photo 2: The main two-sided PCB has ample room for parts, mainly because of the housing size needed to fit the AAA battery pack and LCD.

A single reflective opto-sensor was chosen to perform the scanning detection process, with an optimum sensor-to-paper distance of 1.0 mm. To preserve battery power, the opto-sensor LED is only activated when QuizWiz is pressed against the paper, which depresses a mechanical switch located in the tip. An alternate scheme initially considered required two sensors, the second one used for scanning a parallel column of markings intended only to synchronize the scan position. The additional LED would have significantly increased the power consumption, however.

Normal battery operating current is approximately 25 mA when all circuits are operating, 15 mA when not scanning, and 20 mA during shutdown. Using three AAA batteries in series, with a typical capacity of 1000 mA/h, the teacher can score approximately 100 quizzes for a classroom of 30 students.

QuizWiz uses a simple three-chip design consisting of the processor, a 5-V DC/DC converter, and an RS-232 three-wire interface. The 87LPC764 is a good match for the required QuizWiz features, because all of its pins and most of its features are used in this project. The only features not used are the I2C interface and analog comparators. To minimize cost further, no external crystal is required, because the processor conveniently includes an internal 6-MHz RC oscillator..