Adlink has announced its NXP i.MX8M Plus-based LEC-IMX8MP SMARC 2.1 module, which we covered last November when the product page went up. The company also opened pre-orders on its I-Pi SMARC IMX8M Plus dev kit, which Adlink teased earlier this month when announcing Altium Upverter support for its I-Pi SMARC carrier product line. 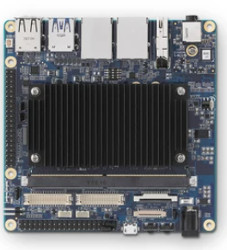 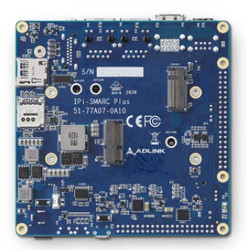 Adlink calls its LEC-IMX8M the first SMARC 2.1 module featuring the i.MX8M Plus. Although the product page still refers to the module as “preliminary,” it is available in single units when bought with the I-Pi SMARC IMX8M Plus. This possibly puts it ahead of the Conga-SMX8-Plus and Seco SM-218 SMARC 2.1 modules, depending on when the I-Pi kit ships.

As we reported in November, the LEC-IMX8MP Adlink’s LEC-IMX8MP is available with the i.MX8M Plus Quad, as well as the no-NPU Quad Lite. The short-sized SMARC module offers a BSP with Debian, Yocto, and Android.

AI developers can also call on NXP’s eIQ machine learning software, which enables consecutive inference on CPU cores, GPU cores, and the NPU. There is support for Caffe, TensorFlow Lite, PyTorch, and ONNX models, as well as “enablement” for models such as MobileNet SSD, DeepSpeech v1, and segmentation networks. Arm NN support is integrated into the Yocto BSP.

The 5V module is available in 0 to 60°C or optional -40 to 85°C models. Other ruggedization features include IEC-60068-2x rated shock and vibration resistance. (For more details see our earlier LEC-IMX8MP report.)

The previously teased I-Pi SMARC IMX8M Plus dev kit is now on pre-order for $400. The price seems a bit steep when compared with similarly sandwich-style i.MX8M Plus based boards such as SolidRun’s $135 to $150 HummingBoard Mate Pico-ITX board or TechNexion’s $199 to $224 Wandboard IMX8M-Plus. Neither of those boards can match the I-Pi’s dual GbE ports, including one with TSN, however, and they fall short on some other features.

The I-Pi SMARC IMX8M Plus ships with the LEC-IMX8MP Quad module with 2GB of soldered RAM and 32GB eMMC. Features include 2x GbE, 2x USB 3.0, 2x USB 2.0, and micro-USB OTG and HDMI coastline ports. There is also a 3.5mm audio jack and microSD slot.

The I-Pi board is further equipped with 4- and 2-lane MIPI-CSI connectors and dual LVDS interfaces based on 4-lane MIPI-DSI. Internal I/O includes 3x UART, 2x CAN 2.0B and or FD, 2x SPI, and a single USB 2.0. The kit ships with a power adapter, cables, and a heatsink.

Expansion features include M.2 M-key and B-key slots for storage and 4G modules, among others. A SIM card slot is also available.

The board supplies a Raspberry Pi HAT compatible 40-pin GPIO header as well as another similar connector, which appears to be for low-power MRAA (pronounced “em rah”) I/O. All the I-Pi boards ship with Intel’s GitHub-hosted MRAA hardware abstraction layer (HAL) for low-speed I/O. They also offer Intel Useful Packages and Modules (UPM) repository of software drivers for commonly used sensors and actuators.

As we noted in our Adlink Altium Upverter story about the I-Pi carriers, the I-Pi line also includes a board based on the LEC-PX30 SMARC module with a Rockchip PX30. There is also an upcoming Elkhart Lake version and possibly a model based on the i.MX8M.

No pricing or availability information was provided for the LEC-IMX8MP. However, the I-Pi SMARC IMX8M Plus dev kit based on the module is available for $400 pre-order, with no ship date listed.

More information may be found in Adlink’s announcement, as well as its preliminary LEC-IMX8MP product page and its I-Pi SMARC IMX8M Plus product page and shopping page. Note that neither page is very detailed and we found many of the specs listed here in the unboxing YouTube video above.

This article originally appeared on LinuxGizmos.com on March 18, 2021