Directing the limited resources of Fighter Command to intercept a fleet of Luftwaffe bombers en route to London or accurately engaging the Imperial Navy at 18,000 yards in the dead of night. This was our grandfather’s radar, the technology that evened the odds in World War II. 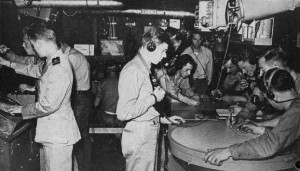 This is the combat information center aboard a World War II destroyer with two radar displays.

Today there is an insatiable demand for short-range sensors (i.e., small radar technology)—from autonomous vehicles to gaming consoles and consumer devices. State-of-the-art sensors that can provide full 3-D mapping of a small-target scenes include laser radar and time-of-flight (ToF) cameras. Less expensive and less accurate acoustic and infrared devices sense proximity and coarse angle of arrival. The one sensor often overlooked by the both the DIY and professional designer is radar.

However, some are beginning to apply small radar technology to solve the world’s problems. Here are specific examples:

Consumer products: Recently, Massachusetts Institute of Technology (MIT) researchers developed a radar sensor for gaming systems, shown to be capable of detecting gestures and other complex movements inside a room and through interior walls. Expect small radar devices to play a key role in enabling user interface on gaming consoles to smartphones.

The Internet of Things (IoT): Fybr is a technology company that uses small radar sensors to detect the presence of parked automobiles, creating the most accurate parking detection system in the world for smart cities to manage parking and traffic congestion in real time. Small radar sensors will enable the IoT by providing accurate intelligence to data aggregators.

What is taking so long? A tremendous knowledge gap exists between writing the application and emitting, then detecting, scattered microwave fields and understanding the result. Radar was originally developed by physicists who had a deep understanding of electromagnetics and were interested in the theory of microwave propagation and scattering. They created everything from scratch, from antennas to specialized vacuum tubes.

Microwave tube development, for example, required a working knowledge of particle physics. Due to this legacy, radar textbooks are often intensely theoretical. Furthermore, microwave components were very expensive—handmade and gold-plated. Radar was primarily developed by governments and the military, which made high-dollar investments for national security. 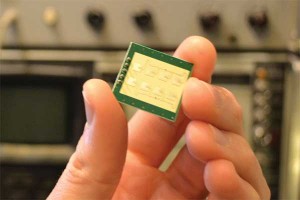 Small radar devices such as the RFBeam Microwave K-LC1a radio transceiver cost less than $10 when purchased in quantity.

It’s time we make radar a viable option for DIY projects and consumer devices by developing low-cost, easy-to-use, capable technology and bridging the knowledge gap!
Today you can buy small radar sensors for less than $10. Couple this with learning practical radar processing methods, and you can solve a critical sensing problem for your project.

Learn by doing. I created the MIT short-course “Build a Small Radar Sensor,” where students learn about radar by building a device from scratch. Those interested can take the online course for free through MIT Opencourseware or enroll in the five-day MIT Professional Education course.

Dive deeper. My soon-to-be published multimedia book, Small and Short-Range Radar Systems, explains the principles and building of numerous small radar devices and then demonstrates them so readers at all levels can create their own radar devices or learn how to use data from off-the-shelf radar sensors.

This is just the beginning. Soon small radar sensors will be everywhere.

Gregory L. Charvat, PhD, is author of the book Small and Short-Range Radar Systems, visiting research scientist at the Massachusetts Institute of Technology (MIT) Media Lab, co-founder of Butterfly Network Inc., and editor of the Gregory L. Charvat Series on Practical Approaches to Electrical Engineering. Greg has developed numerous radar and imaging sensors, radio transceivers, and audio equipment and holds several patents. From 2007–2011, he was a technical staff member at the MIT Lincoln Laboratory, where his through-wall radar won best paper at the 2010 MSS Tri-Services Radar Symposium and is an MIT Office of the Provost 2011 research highlight. He created the MIT short-course “Build a Small Radar Sensor,” which has become widely adopted by other universities, labs, and organizations. His website is http://glcharvat.com.

The Future of Small Radar Technology