Home » The Future of Circuit Design

The cloud is changing the way we build circuits. In the near future we won’t make our own symbols, or layout our own traces, review our own work, or even talk to our manufacturers. We are moving from a world of desktop, offline, email-based engineering into a bold new world powered by collaborative tools and the cloud.

I know that’s a strong statement, so let me try to explain. I think a lot about how we work as engineers. How our days are filled, how we go about our tasks, and how we accomplish our missions. But also how it’s all changing, what the future of our work looks like, and how the cloud, outsourcing, and collaboration are changing everything. 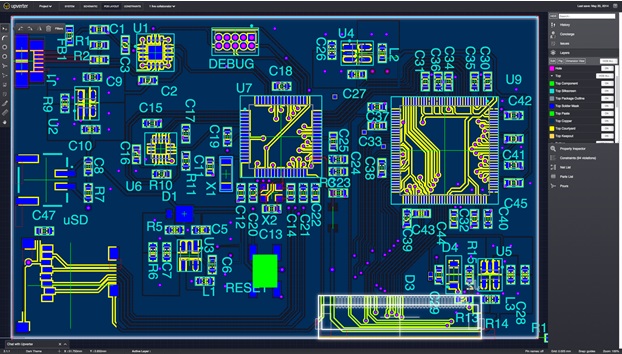 For the past five years I’ve been a pioneer. I started the first company to attempt to build a fully-cloud circuit design tool. That was years before anyone else even thought it was possible. It was before Google docs went mainstream, and before Github became the center of the software universe. I didn’t build it because I have some love affair with the cloud (though I do now), or because deep down inside I wanted to make CAD software (eek!), I did it because I believed in a future of work that required collaboration.

So how does it work? Well, instead of double clicking an icon on your desktop, you open your web-browser and navigate to upverter.com. Then, instead of opening a file on your harddrive, you open one of your designs stored in the cloud. It loads, looks, and feels exactly the same as your existing design tools. You make your changes, and it automatically saves a new version, work some more, and ultimately export your Geber files in exactly the same way as you would with a desktop tool.

The biggest difference is that instead of working alone, instead of creating every symbol yourself, or emailing files, you are part of an ecosystem. You can request parts, and invite your teammates or your manufacturer to participate in the design. They can make comments and recommendations—right there in the editor. You can share your design by emailing a URL. You can check part inventory and pricing in real-time. You get notified when your colleagues do work, when changes get made, and when parts get updates. It feels a lot like how it’s supposed to work and maybe the best yet, it’s cheaper too.

Let me dispel a few myths.

The cloud is insecure: Of course it is. Almost every system has a flaw. But what you need to ask instead is relative security. Is the cloud any less secure than your desktop? And the answer shouldn’t surprise you. The cloud is about 10× MORE secure than your office desktop (let alone your phone or laptop). It turns out when companies employ people to worry about security they do a better job than the IT guys at your office park.

The cloud is slow: Not true. Web browsers have gotten so fast over the past decade that today compiled C code is only 3× faster thana JavaScript. In that same time your computer got 5× faster than it used to be, and that desktop software you’re running was written in the 90s (that’s a bad thing). And there is more compute power, available to the cloud that anywhere on Earth. All of which adds up to most cloud apps actually running faster than the desktop apps they replace.

Collaboration is for teams: True. But even if you feel like you’re on a team of one, no one really works alone these days. You order parts from a vendor, someone else did your reference design, you don’t manufacture your boards yourself. There could be as many as a dozen people supporting you that you don’t even realize. Imagine if they had the full context of what you’re building? Imagine if you could truly collaborate instead of putting up with emails and phone calls.

CEO and co-founder at Upverter | + posts

Zak Homuth is the CEO and co-founder of Upverter, as well as a Y Combinator alumni. At Upverter, Zak has overseen product development and design from the beginning, including the design toolchain, collaborative community and ondemand simulators. Improving the rate of innovation in hardware engineering, including introducing collaboration and sharing, has been one of his central interests for almost a decade, stemming from his time as an hardware engineer working on telecommunication hardware. Prior to Upverter, Zak founded an electronics manufacturing service, and served as the company’s CEO. Before that, he founded a consulting company, which provided software and hardware services. Zak has worked for IBM, Infosys, and Sandvine and attended the University of Waterloo, where he studied Computer Engineering before taking a leave of absence.

The Future of Circuit Design

Insights The Future of Commodity Hardware Security and Your…

Insights Innovations in Mobile Robotics: An Interview with …