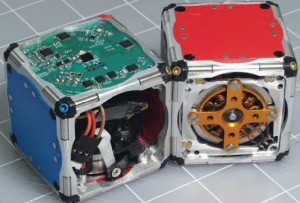 Imagine the convenience of a universal toolkit that can produce even the most specialized tool on demand in a matter of minutes. Alternatively, consider a piece of furniture, or an entire room, that could change its configuration to suit the personal preferences of its occupant. Assembly lines could automatically adapt to new products, and construction scaffolding could build itself while workers sleep. At MIT’s Distributed Robotics Lab, we are working to make these dreams into reality through the development of the M-Blocks.

The M-Blocks are a set of 50-mm cubic modules capable of controlled self-reconfiguration. Each M-Block is an autonomous robot that can not only move independently, but can also magnetically bond with other M-Blocks to form larger reconfigurable systems. When part of a group, each module can climb over and around its neighbors. Our goal is that a set of M-Blocks, dispersed randomly across the ground, could locate one another and then independently move to coalesce into a macro-scale object, like a chair. The modules could then reconfigure themselves into a sphere and collectively roll to a new location. If, in the process, the collective encounters an obstacle (e.g., a set of stairs to be ascended), the sphere could morph into an amorphous collection in which the modules climb over one another to surmount the obstacle.  Once they have reached their final destination, the modules could reassemble into a different object, like a desk.

The M-Blocks move and reconfigure by pivoting about their edges using an inertial actuator. The energy for this actuation comes from a 20,000-RPM flywheel contained within each module. Once the motor speed has stabilized, a servomotor-driven, self-tightening band brake decelerates the flywheel to a complete stop in 15 ms. All of the momentum that had been accumulated in the flywheel is transferred to the frame of the M-Block. Consequently, the module rolls forward from one face to the next, or if the flywheel velocity is high enough, it rapidly shoots across the ground or even jumps several body lengths through the air. (Refer to www.youtube.com/watch?v=mOqjFa4RskA  to watch the cubes move.)

While the M-Blocks are capable of independent movement, their true potential is only realized when many modules operate as a group. Permanent magnets on the outside of each M-Block serve as un-gendered connectors. In particular, each of the 12 edges holds two cylindrical magnets that are captive, but free to rotate, in a semi-enclosing cage. These magnets are polarized through their radii, not through their long axes, so as they rotate, they can present either magnetic pole. The benefit of this arrangement is that as two modules are brought together, the magnets will automatically rotate to attract. Furthermore, as one and then two additional M-Blocks are added to form a 2 × 2 grid, the magnets will always rotate to realign and accommodate the additional modules.

The same cylindrical magnets that bond neighboring M-Blocks together form excellent pivot axes, about which the modules may roll over and around one another. We have shown that the modules can climb vertically over other modules, move horizontally while cantilevered from one side, traverse while suspended from above, and even jump over gaps. The permanent magnet connectors are completely passive, requiring no control and no planning. Because all of the active components of an M-Block are housed internally, the modules could be hermetically sealed, allowing them to operate in extreme environment where other robotic systems may fail.

While we have made significant progress, many exciting challenges remain. In the current generation of modules, there is only a single flywheel, and it is fixed to the module’s frame, so the modules can only move in one direction along a straight line. We are close to publishing a new design that enables the M-Blocks to move in three dimensions, makes the system more robust, and ensures that the modules’ movements are highly repeatable. We also hope to build new varieties of modules that contain cameras, grippers, and other specialized, task-specific tools. Finally, we are developing algorithms that will allow for the coordinated control of large ensembles of hundreds or thousands of modules. With this continued development, we are optimistic that the M-Blocks will be able to solve a variety of practical challenges that are, as of yet, largely untouched by robotics.

Kyle Gilpin, PhD, is a Postdoctoral Associate in the Distributed Robotics Lab at the Massachusetts Institute of Technology (MIT) where he is collaborating with Professor Daniela Rus and John Romanishin to develop the M-Blocks. Kyle works to improve communication and control in large distributed robotic systems. Before earning his PhD, Kyle spent two years working as a senior electrical engineer at a biomedical device start-up. In addition to working for MIT, he owns a contract design and consulting business, Crosscut Prototypes. His past projects include developing cellular and Wi-Fi devices, real-time image processing systems, reconfigurable sensor nodes, robots with compliant SMA actuators, integrated production test systems, and ultra-low-power sensors.