For my entire life, my mother has been a technology trainer for various educational institutions, so it’s probably no surprise that I ended up as an engineer with a passion for STEM education. When I heard about the Raspberry Pi, a diminutive $25 computer, my thoughts immediately turned to creating low-cost mobile computing labs. These labs could be easily and quickly loaded with a variety of programming environments, walking students through a step-by-step curriculum to teach them about computer hardware and software.

However, my time in the robotics field has made me realize that this endeavor could be so much more than a traditional computer lab. By adding actuators and sensors, these low-cost SBCs could become fully fledged robotic platforms. Leveraging the common I2C protocol, adding chains of these sensors would be incredibly easy. The SBCs could even be paired with microcontrollers to add more functionality and introduce students to embedded design. 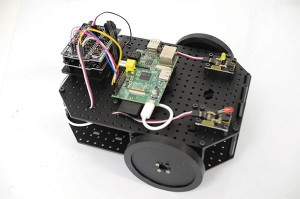 There are many ways to introduce students to programming robot-computers, but I believe that a web-based interface is ideal. By setting up each computer as a web server, students can easily access the interface for their robot directly though the computer itself, or remotely from any web-enabled device (e.g., a smartphone or tablet). Through a web browser, these devices provide a uniform interface for remote control and even programming robotic platforms.

A server-side language (e.g., Python or PHP) can handle direct serial/I2C communications with actuators and sensors. It can also wrap more complicated robotic concepts into easily accessible functions. For example, the server-side language could handle PID and odometry control for a small rover, then provide the user functions such as “right, “left,“ and “forward“ to move the robot. These functions could be accessed through an AJAX interface directly controlled through a web browser, enabling the robot to perform simple tasks.

This web-based approach is great for an educational environment, as students can systematically pull back programming layers to learn more. Beginning students would be able to string preprogrammed movements together to make the robot perform simple tasks. Each movement could then be dissected into more basic commands, teaching students how to make their own movements by combining, rearranging, and altering these commands.

By adding more complex commands, students can even introduce autonomous behaviors into their robotic platforms. Eventually, students can be given access to the HTML user interfaces and begin to alter and customize the user interface. This small superficial step can give students insight into what they can do, spurring them ahead into the next phase.
Students can start as end users of this robotic framework, but can eventually graduate to become its developers. By mapping different commands to different functions in the server side code, students can begin to understand the links between the web interface and the code that runs it.

Students will delve deeper into the server-side code, eventually directly controlling actuators and sensors. Once students begin to understand the electronics at a much more basic level, they will be able to improve this robotic infrastructure by adding more features and languages. While the Raspberry Pi is one of today’s more popular SBCs, a variety of SBCs (e.g., the BeagleBone and the pcDuino) lend themselves nicely to building educational robotic platforms. As the cost of these platforms decreases, it becomes even more feasible for advanced students to recreate the experience on many platforms.

We’re already seeing web-based interfaces (e.g., ArduinoPi and WebIOPi) lay down the beginnings of a web-based framework to interact with hardware on SBCs. As these frameworks evolve, and as the costs of hardware drops even further, I’m confident we’ll see educational robotic platforms built by the open-source community.

Kyle Granat, who wrote this essay for Circuit Cellar,  is a hardware engineer at Trossen Robotics, headquarted in Downers Grove, IL. Kyle graduated from Purdue University with a degree in Computer Engineering. Kyle, who lives in Valparaiso, IN, specializes in embedded system design and is dedicated to STEM education.