In 2010, the Bluetooth Special Interest Group (SIG) took Nokia’s existing Wibree standard and renamed it Bluetooth Low Energy (BLE). In doing so, it combined the latest in a series of evolutionary engineering improvements with brute-force market pressure to change the wireless landscape.

Adding BLE to the Bluetooth 4.0 specification has spurred rapid adoption. In fact, the SIG predicts that 90% of Bluetooth-enabled smartphones will support BLE by 2018. Before this wide adoption, a Wibree-based product had to include both sides of the radio link. Now a BLE-based device can ship with the assumption that the customer already owns the receiving half. This enables system architects to consider the user interface (UI) to be a software problem, not a hardware one. Hardware UIs are expensive and their power requirements are many orders of magnitude higher. BLE-based design can cut total product costs by more than half and increase usability by leveraging the customer’s smartphone. This provides a high-resolution screen, an already familiar user experience, and an Internet connection essentially for free. 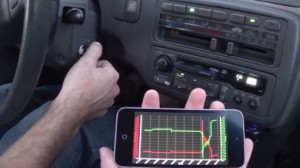 Wibree’s main technical value proposition is its extremely small power draw. Our company, Mooshim Engineering, offers the Mooshimeter, a wireless multimeter and data logger that uses your smartphone as a display. The transceiver we use for the Mooshimeter consumes a little less than 100 µW average draw to both send broadcast announcements every few seconds and listen for wake-up requests. This is roughly 10 to 100 times more power than a quartz watch, but 10 to 100 times less power than the watch’s backlight. Like the wristwatch, this draw is extremely peaky and depends heavily on usage. Products that only need to transmit can pull as little as 155 µJ per announcement. This provides more than a year of standby time.

Using 100-μW average draw as a starting point and assuming perfect power conversion, power could be provided by 2 to 4 mg per day of storage with a rechargeable lithium-ion battery; 1 to 3 g per day of storage with a supercapacitor; 10 mm2 of solar cells placed in a good spot outdoors; 5 cm2 of skin contact using thermal harvesters (e.g., a narrow but secure wristband); vibration harvesters, either on our limbs or in heavy industrial settings; or –10 dBm of wireless power transfer. An alkaline AA battery could ideally provide four years of service, although its self-discharge is more than 10% of the energy budget.

These power levels enable devices to have a high level of energy independence and become truly wireless—no data wire and no power wire. Thus architects can explore new relationships among devices, their environments, and their users. Connectors don’t compromise environmental seals, and frequent recharging doesn’t compromise the user’s experience.

The 100-μW  budget assumes the device just periodically announces its existence (as with wireless tethers and remote wake-up). But in uses that require more interesting payloads, the value proposition may be that the wireless link can fade into the noise of the energy budget. Remoting the user interface can also save energy, as even a dim indicator LED draws a milliwatt.

BLE is gaining its heaviest traction in electronic wearables, where users are likely to have BLE-enabled smartphones and a willingness to try new technologies. Fitness aids are enjoying early success because their sensor payloads are relatively low power and they address a large user base.

Medical wearables will take longer because of regulatory concerns and the user base. Diabetics may carry several screens with them, and often these devices will use proprietary radio protocols. Moving to a standard protocol could reduce the carry burden and provide a more secure data link. Standardization improves security through the principle of “given enough eyeballs, all bugs are shallow.”

Home appliances may be third-wave BLE adopters. The power draw is irrelevant here. A high-efficiency transformer wastes 10,000 times more power than the radio uses. It likely won’t eliminate the need for a hardware user interface either. Who wants to load an app to microwave their dinner? The convincing use case is to provide powerful diagnostic and monitoring capabilities. A refrigerator can tell a user’s phone when it needs a new filter. Washing machines can push notifications. Smoke detectors will proactively demand replacement batteries.

Eric VanWyk, who wrote this essay for Circuit Cellar, is co-founder of Mooshim Engineering and an adjunct instructor at Franklin W. Olin College of Engineering in Needham, MA, where he earned his BSc in Electrical and Computer Engineering in 2007. His background is in educational robotics, short-range wireless, and medical device development. Eric and his business partner, James Whong, have joined the rapidly growing number of innovators developing hardware and sensor add-ons that take advantage of Bluetooth Low Energy (BLE) 4.0 in today’s mobile devices. Their crowdfunded Mooshimeter is a multichannel circuit testing meter that uses a smartphone or tablet, via BLE, as a wireless, high-resolution graphical display.