Home » The Internet of Things: A Very Disruptive Force

We met with Geoff Lees (Senior Vice President & General Manager of Microcontrollers, Freescale) at the 2015 Embedded World Show in Nuremberg, Germany. We asked him about the Internet of Things, the big changes on the embedded systems horizon, and what it takes to be a successful engineer. 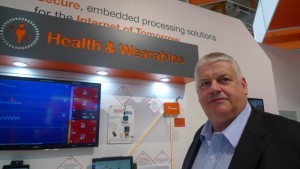 CIRCUIT CELLAR: The Embedded World Show is one of the biggest that specifically focuses on embedded technologies, new products, and design. What makes this show special?

CIRCUIT CELLAR: Talking about individual engineers, we remember last year in your press conference you mentioned a focus on hobbyists. That’s quite remarkable for a company like Freescale. We also see there is a small “maker lab” in your booth at the show.

GEOFF: It is important to address makers and hobbyists for two reasons. First, there are the sheer numbers. At Maker Show in New York, you see there a 100,000 people showing up. At a show like this, it is 20,000 to 25,000. Here we see the engineering teams of companies. But what is interesting about the maker community is that individuals can have an idea or innovation, create and build the prototypes, but instead of having a company making this, they have the community and can even go to market. 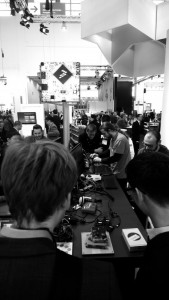 CIRCUIT CELLAR: Sometimes we get the idea that the bigger companies are looking at the crowd-funding communities as part of—or as a replacement for—their own R&D activities. How does that work for a company like Freescale?

GEOFF: One thing that’s very clear in today’s world is speed. Sometimes an individual, with very little obstruction, can have speed that cannot be matched by companies—and someone who can respond or react to the requirements almost instantaneously has an advantage. There are so many of these. Finding and communicating with them is almost an impossible task. You really have to watch carefully. It is almost impossible to know where the next innovation is coming from.

GEOFF: The IoT is a very disruptive force. It started out as a buzz, but it is in the “nature” of microcontrollers to connect and to communicate. With new Wi-Fi concepts, low-power and IPv6 the road is clear for many new applications. To demonstrate the new technologies we have a “bigger than big” truck driving through the US. We put it in the parking lot of companies and demo not only our own products, but also their products as well as the solutions of their competitors. With a show you get the designers or marketing people. With the truck we also have CEOs and CTOs for a coffee—the guys who would not even consider visiting our website!

CIRCUIT CELLAR: But how will the IoT affect us?

GEOFF: I currently have eight apps on my phone that are all IoT controls, monitoring my house, solar panels, and vehicle. I expect that number will grow. Also, devices will talk to devices and create new independent controls. “Big Ass Fans” is a nice example of that. That company is making fans but is also playing a role in home automation. Their latest model fan talks to the NEST. Only a small difference in temperature can set the fan to work rather than your air conditioning, either by cooling down or circulating the hotter air downwards.

CIRCUIT CELLAR: Everyone knows that standards are key to making the IoT really happen. What role does Freescale have in this?

GEOFF: We joined up with the Thread Group. This initiative started with only eight companies, and that number has grown to 50 in five months, and now we see around 1,000 companies that look for information. If we see a growth from eight to 50 to 1,000, you know that there is a momentum which will result in new standards. The Thread Group uses existing (IEEE 8082.15.4) technologies and standards to build a new wireless mesh protocol that will enable to overcome the current limitations in wireless home automation. The Thread Networks will aim at the simple installation of new nodes and it can scale up to 250 and more devices in a single network. No company—whether you are Cisco or IBM or Oracle—has the power to set the standard on their own, maybe a part of it, but not all. This will go as usual, an initiative will gain critical mass, and then the momentum drives it through. This will all be about momentum.

The Internet of Things: A Very Disruptive Force