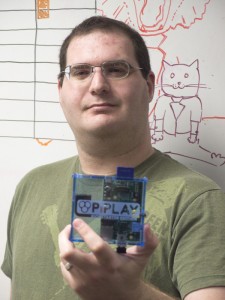 SHEA: Web applications developer with the Center for Distributed Learning at the University of Central Florida (UCF).

NAN: Why and when did you decide to start your blog?

SHEA: I’ve been blogging on and off for years, but I could never keep to a schedule or really commit myself to writing. After I started working on side projects, I realized I needed a place to store tips and tricks I had figured out. I installed WordPress, posted some PhoneGap tips, and within a day got a comment from someone who had the same issue, and my tips helped them out. I have been blogging ever since. I make sure to post every Friday night.

NAN: Tell us about PiPlay, the Raspberry Pi OS. Why did you start the OS? What new developments, if any, are you working on? 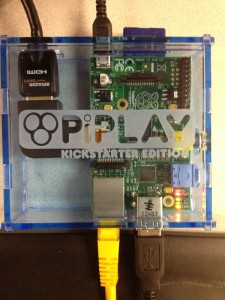 SHEA: PiPlay is a gaming and emulation distribution for the Raspberry Pi single-board computer. It is built on top of the Raspbian OS, and tries to make it as easy as possible to play games on your Raspberry Pi. My blog got really popular after I started posting binaries and tutorials on how to compile different emulators to the Raspberry Pi, but I kept getting asked the same questions and saw users struggling with the same consistent issues.

I decided I would release a disk image with everything preconfigured and ready to be loaded onto an SD card. I’ve been adding new emulators, games, and tools to it ever since.

I just recently completed a Kickstarter that is funding the next release, which includes a much nicer front end, a web GUI, and a better controller configuration system.

NAN: You wrote Instant Raspberry Pi Gaming. Do you consider this book introductory or is it written for the more experienced engineer?

SHEA: Instant Raspberry Pi Gaming is written like a cookbook with recipes for doing various tasks. Some of them are very simple, and they build up to some more advanced recipes. One of the easier tasks is creating your user account on the Pi Store, while the more advanced recipes have you working with Python and using an API to interact with Minecraft.

Readers will learn how to setup a Raspberry Pi, install and use various emulators and games, a bit about the Minecraft API, and common troubleshooting tips. 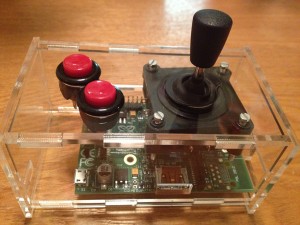 The Pitroller is a joystick and buttons hooked up to the GPIO pins of a Raspberry Pi, which can act as a controller or keyboard for various emulators.

NAN: You are a member of FamiLAB, an Orlando, FL-based community lab/hackerspace. What types of projects have you worked on at the lab? 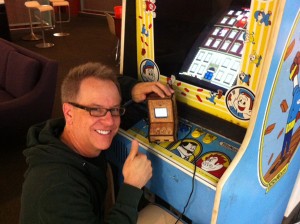 Disney director Rich Moore poses with Shea’s miniature arcade machine. The machine was based on Fix It Felix Jr. from Disney’s Wreck It Ralph.

SHEA: I spend a lot of time at the lab using the laser cutter. Creating a 2-D vector in Inkscape, and then watching it be cut out on a piece of wood or acrylic is really inspiring. My favorite project was making a little arcade machine featuring Fix It Felix Jr. from Wreck It Ralph. A marketing person from Disney was able to get it into the hands of the director Rich Moore. He sent me a bunch of pictures of himself holding my little arcade machine next to the full size version.

NAN: Give us a little background information. How did you become interested in technology?

SHEA: My mom always likes to remind me that I’ve been using computers since I was 2. My parents were very interested in technology and encouraged my curiosity when it came to computers. I always liked to take something apart and see how it worked, and then try to put it back together. As the years went on, I’ve devoted more and more time to making technology a major part of my life.

NAN: Tell us about the first embedded system you designed.

SHEA: I have a lot of designs, but I don’t think I’ve ever finished one. I’ll be halfway into a project, learn about something new, then cannibalize what I was working on and repurpose it for my new idea. One of the first embedded projects I worked on was a paintball board made out of a PICAXE microcontroller. I never got it small enough to fit inside the paintball marker, but it was really cool to see everything in action. The best part was when I finally had that “ah-ha!” moment, and everything I was learning finally clicked.

SHEA: At UCF, one of our teams utilizes a ticket system for dealing with requests. Our department does a hack day each semester, so my coworker and I decided to rig up a system that changes the color of the lights in the office depending on the urgency of requests in the box. We coded up an API and had a Raspberry Pi ping the API every few minutes for updates. We then hooked up two Arduinos to the Raspberry Pi and color-changing LED strips to the Arduinos. We set it up and it’s been working for the past year and a half, alerting the team with different colors when there is work to do.

SHEA: My Kickstarter for PiPlay just finished at 400% funding. So right now I’m busy working on fulfilling the rewards, and writing the latest version of PiPlay.

SHEA: Wearable computing. Google Glass, the Pebble smart watch, Galaxy Gear—I think these are all great indicators of where our technology is heading. We currently have very powerful computers in our pockets with all kinds of sensors and gadgets built in, but very limited ways to physically interact with them (via the screen, or a keypad). If we can make the input devices modular, be it your watch, a heads-up display, or something else, I think that is going to spark a new revolution in user experiences.