Scott Garman is more than just a Linux software engineer. He is also heavily involved with the Yocto Project, an open-source collaboration that provides tools for the embedded Linux industry. In 2013, Scott helped Intel launch the MinnowBoard, the company’s first open-hardware SBC. —Nan Price, Associate Editor 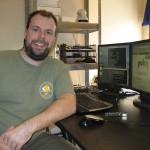 NAN: Describe your current position at Intel. What types of projects have you developed?

SCOTT: I’ve worked at Intel’s Open Source Technology Center for just about four years. I began as an embedded Linux software engineer working on the Yocto Project and within the last year, I moved into a technical evangelism role representing Intel’s involvement with the MinnowBoard.

Before working at Intel, my background was in developing audio products based on embedded Linux for both consumer and industrial markets. I also started my career as a Linux system administrator in academic computing for a particle physics group. 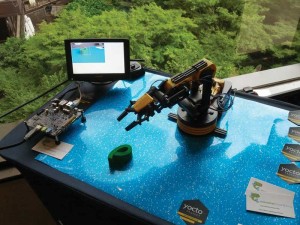 Scott was involved with an Intel MinnowBoard robotics and computer vision demo, which took place at LinuxCon Japan in May 2013.

I’m definitely a generalist when it comes to working with Linux. I tend to bounce around between things that don’t always get the attention they need, whether it is security, developer training, or community outreach. 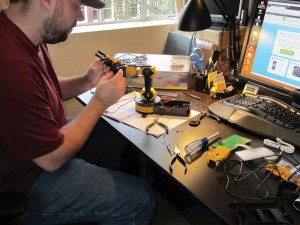 Scott is shown working on an Intel MinnowBoard demo, which was built around an OWI Robotic Arm.

NAN: Can you tell us a little more about your involvement with the Yocto Project (www.yoctoproject.org)?

SCOTT: The Yocto Project is an effort to reduce the amount of fragmentation in the embedded Linux industry. It is centered on the OpenEmbedded build system, which offers a tremendous amount of flexibility in how you can create embedded Linux distros. It gives you the ability to customize nearly every policy of your embedded Linux system, such as which compiler optimizations you want or which binary package format you need to use. Its killer feature is a layer-based architecture that makes it easy to reuse your code to develop embedded applications that can run on multiple hardware platforms by just swapping out the board support package (BSP) layer and issuing a rebuild command.

New releases of the build system come out twice a year, in April and October. 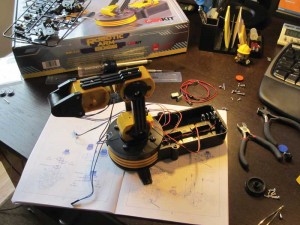 Here, the OWI Robotic Arm is being assembled.

I’ve maintained various user space recipes (i.e., software components) within OpenEmbedded (e.g., sudo, openssh, etc.). I’ve also made various improvements to our emulation environment, which enables you to run QEMU and test your Linux images without having to install it on hardware.

I created the first version of a security tracking system to monitor Common Vulnerabilities and Exposures (CVE) reports that are relevant to recipes we maintain. I also developed training materials for new developers getting started with the Yocto Project, including a very popular introductory screencast “Getting Started with the Yocto Project—New Developer Screencast Tutorial”

Scott doesn’t have a dedicated workbench or garage. He says he tends to just clear off his desk, lay down some cardboard, and work on things such as the Trippy RGB Waves Kit, which is shown.

The MinnowBoard also has the embedded bus standards you’d expect, including GPIO, I2C, SPI, and even CAN (used in automotive applications) support. We have an expansion connector on the board where we route these buses, as well as two lanes of PCI Express for custom high-speed I/O expansion.

There are countless things you can do with MinnowBoard, but I’ve found it is especially well suited for projects where you want to combine embedded hardware with computing applications that benefit from higher performance (e.g., robots that use computer vision, as a central hub for home automation projects, networked video streaming appliances, etc.).

And of course it’s open hardware, which means the schematics, Gerber files, and other design files are available under a Creative Commons license. This makes it attractive for companies that want to customize the board for a commercial product; educational environments, where students can learn how boards like this are designed; or for those who want an open environment to interface their hardware projects.

I created a MinnowBoard embedded Linux board demo involving an OWI Robotic Arm. You can watch a YouTube video to see how it works.

SCOTT: The main motivation for the MinnowBoard was to create an affordable Atom-based development platform for the Yocto Project. We also felt it was a great opportunity to try to release the board’s design as open hardware. It was exciting to be part of this, because the MinnowBoard is the first Atom-based embedded board to be released as open hardware and reach the market in volume.

Open hardware enables our customers to take the design and build on it in ways we couldn’t anticipate. It’s a concept that is gaining traction within Intel, as can be seen with the announcement of Intel’s open-hardware Galileo project.

NAN: What types of personal projects are you working on?

SCOTT: I’ve recently gone on an electronics kit-building binge. Just getting some practice again with my soldering iron with a well-paced project is a meditative and restorative activity for me. 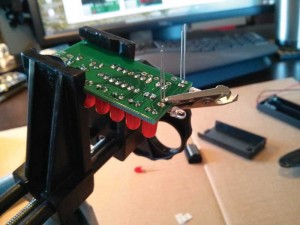 Scott’s Blinky POV Kit is shown. “I don’t know what I’d do without my PanaVise Jr. [vise] and some alligator clips,” he said.
I worked on one project, the Trippy RGB Waves Kit, which includes an RGB LED and is controlled by a microcontroller. It also has an IR sensor that is intended to detect when you wave your hand over it. This can be used to trigger some behavior of the RGB LED (e.g., cycling the colors). Another project, the Blinky POV Kit, is a row of LEDs that can be programmed to create simple text or logos when you wave the device around, using image persistence. 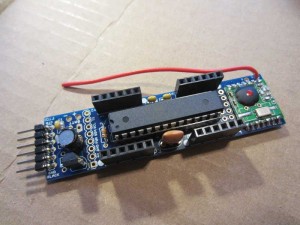 Below is a completed JeeNode v6 Kit Scott built one weekend.

My current project is to add some wireless sensors around my home, including temperature sensors and a homebrew security system to monitor when doors get opened using 915-MHz JeeNodes. The JeeNode is a microcontroller paired with a low-power RF transceiver, which is useful for home-automation projects and sensor networks. Of course the central server for collating and reporting sensor data will be a MinnowBoard.

NAN: Tell us about your involvement in the Portland, OR, open-source developer community.

SCOTT: Portland has an amazing community of open-source developers. There is an especially strong community of web application developers, but more people are hacking on hardware nowadays, too. It’s a very social community and we have multiple nights per week where you can show up at a bar and hack on things with people. 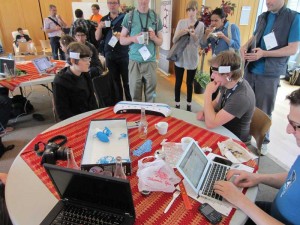 This photo was taken in the Open Source Bridge hacker lounge, where people socialize and collaborate on projects. Here someone brought a brainwave-control game. The players are wearing electroencephalography (EEG) readers, which are strapped to their heads. The goal of the game is to use biofeedback to move the floating ball to your opponent’s side of the board.

I’d say it’s a novelty if I wasn’t so used to it already—walking into a bar or coffee shop and joining a cluster of friendly people, all with their laptops open. We have coworking spaces, such as Collective Agency, and hackerspaces, such as BrainSilo and Flux (a hackerspace focused on creating a welcoming space for women).

Take a look at Calagator to catch a glimpse of all the open-source and entrepreneurial activity going on in Portland. There are often multiple events going on every night of the week. Calagator itself is a Ruby on Rails application that was frequently developed at the bar gatherings I referred to earlier. We also have technical conferences ranging from the professional OSCON to the more grassroots and intimate Open Source Bridge.

I would unequivocally state that moving to Portland was one of the best things I did for developing a career working with open-source technologies, and in my case, on open-source projects.

Insights The Future of Inkjet-Printed Electronics