Written by Nan Price
Peter Matteson, a Senior Project Engineer at Pratt & Whitney in East Hartford, CT, has a passion for robotics. We recently discussed how he became involved with mentoring a high school robotics team, the types of robots the team designs, and the team’s success.—Nan Price, Associate Editor

NAN: You mentor a FIRST (For Inspiration and Recognition of Science and Technology) robotics team for a local high school. How did you become involved? 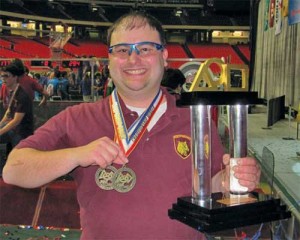 PETER: I became involved in FIRST in late 2002 when one of my fraternity brothers who I worked with at the time mentioned that FIRST was looking for new mentors to help the team the company sponsored. I was working at what was then known as UTC Power (sold off to ClearEdge Power Systems last year) and the company had sponsored Team 177 Bobcat Robotics since 1995.

After my first year mentoring the kids and experiencing the competition, I got hooked. I loved the competition and strategy of solving a new game each year and designing and building a robot. I enjoyed working with the kids, teaching them how to design and build mechanisms and strategize the games. 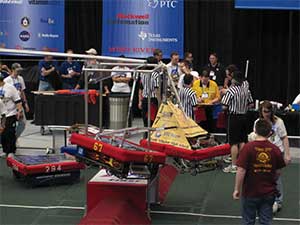 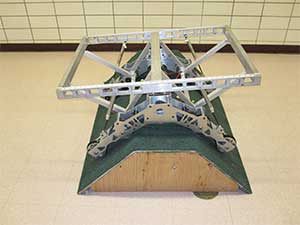 A robot’s articulating drive train is tested on an obstacle (bump) at the 2010 competition.

NAN: What types of robots has your team built? 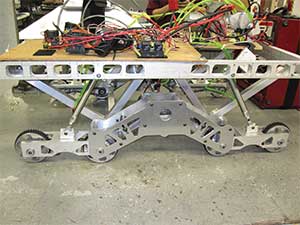 A temporary control board was used to test the drive base at the 2010 competition.

PETER: Every robot we make is purposely built for a specific game the year we build it. The robots have varied from arm robots with a 15’ reach to catapults that launch a 40” diameter ball, to Frisbee throwers, to Nerf ball shooters.

NAN: What types of products do you use to build the robots? Do you have any favorites?

PETER: We use a variant of the Texas Instruments (TI) cRIO electronics kit for the controller, as is required per the FIRST competition rules. The motors and motor controllers we use are also mandated to a few choices. We prefer VEX Robotics VEXPro Victors, but we also design with the TI Jaguar motor controllers. For the last few years, we used a SparkFun CMUcam webcam for the vision system. We build with Grayhill encoders, various inexpensive limit switches, and gyro chips. 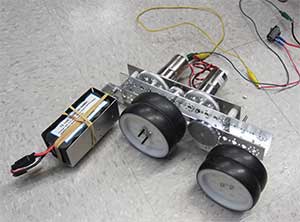 The team designed a prototype minibot.

For pneumatics we utilize compressors from Thomas and VIAIR. Our cylinders are primarily from Bimba, but we also use Parker and SMC. For valves we use SMC and Festo. We usually design with clipart plastic or stainless accumulator tanks. Our gears and transmissions come from AndyMark, VEX Robotics’s VEXPro, and BaneBots.

The AndyMark shifter transmissions were a mainstay of ours until last year when we tried the VEXPro transmissions for the first time. Over the years, we have utilized many of the planetary transmissions from AndyMark, VEX Robotics, and BaneBots. We have had good experience with all the manufacturers. BaneBots had a shaky start, but it has vastly improved its products.

We have many other odds and ends we’ve discovered over the years for specific needs of the games. Those are a little harder to describe because they tend to be very specific, but urethane belting is useful in many ways.

NAN: Has your team won any competitions? 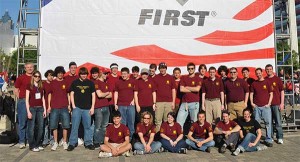 Peter’s FIRST team is pictured at the 2009 championship at the Georgia Dome in Atlanta, GA. (Peter is standing fourth from the right.)

PETER: My team is considered one of the most successful in FIRST. We have won four regional-level competitions. We have always shined at the competition’s championship level when the 400 teams from the nine-plus countries that qualify vie for the championship. 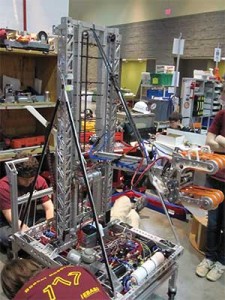 A FIRST team member works on a robot “in the pits” at the 2011 Hartford, CT, regional competition.

PETER: I am a Senior Project Engineer at Pratt & Whitney. I oversee and direct a team of engineers designing components for commercial aircraft propulsion systems.

NAN: How and when did you become interested in robotics?

PETER: I have been interested in robotics for as long as I can remember. The tipping point was probably when I took an industrial robotics course in college. That was when I really developed a curiosity about what I could do with robots.

The industrial robots course started with basic programming robots for tasks. We had a welding robot we taught the weld path and it determined on its own how to get between points.

We also worked with programming a robot to install light bulbs and then determine if the bulbs were working properly.

In addition to practical labs such as those, we also had to design the optimal robot for painting a car and figure out how to program it. We basically had to come up with a proposal for how to design and build the robot from scratch. 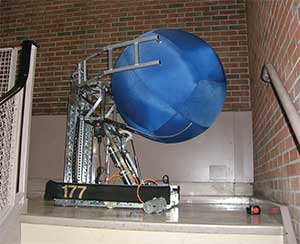 This robot from the 2008 competition holds a 40” diameter ball for size reference.

NAN: What advice do you have for engineers or students who are designing robots or robotic systems?

PETER: My advice is to clearly set your requirements at the beginning of the project and then do some research into how other people have accomplished them. Use that inspiration as a stepping-off point. From there, you need to build a prototype. I like to use wood, cardboard, and other materials to build prototypes. After this you can iterate to improve your design until it performs exactly as expected.