Written by Nan Price
Dru Lavigne wasn’t always interested in networking applications. I recently interviewed her about how she discovered UNIX and launched her career as an OS specialist and technical writer. She also described her “to-do” list, which includes more writing, and her hopes for the future of the BSD OS.—Nan Price, Associate Editor 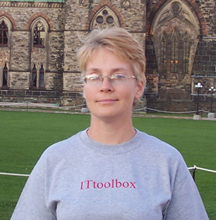 DRU: I’m the lead tech writer for iXsystems, a hardware solutions provider and corporate sponsor of the FreeNAS and PC-BSD open-source projects. Since both of these projects publish a comprehensive user’s guide with each software release, most of my time is spent making sure each guide is kept up to date as changes are made to these OSes. I’m also involved in the FreeBSD Documentation Project and I am currently assisting in updating and preparing the FreeBSD Handbook for publication in a two-volume format.

NAN: What is the FreeBSD Foundation?

DRU: The FreeBSD Foundation is a 501.c3 nonprofit that provides financial support and a legal entity for the FreeBSD Project.

The FreeBSD Foundation provides grants so developers can attend conferences and developer summits, sponsors developers to work on specific software projects that would benefit the FreeBSD community, interacts with companies that use FreeBSD to determine their needs, and assists in introducing developers to the community. As a director, I assist in fundraising and advocacy, reviewing project proposals, and developing relationships.

NAN: What is BSD? What is the difference between BSD and Linux?

DRU: BSD is a UNIX-like OS that was originally developed at the University of California Berkeley in the 1970s. When the university stopped developing the OS, several open-source projects began to continue development.

Its lineage differs from Linux as Linux is derived from a different UNIX branch known as SysV. Traditionally, the most noticeable difference is that SysV systems use run levels whereas BSD systems do not. The release engineering process also differs between BSD and Linux. BSD projects release an entire OS with a set of base tools included in the OS’s userland. The entire OS has a release engineering team that is responsible for the release and a security team that is responsible for security advisories until a release reaches its end-of-life (EOL). In contrast, Linux itself is only the kernel. Each distro integrates that kernel into its installer, package management system, and userland to create a complete OS.

NAN: How long have you been using BSD? When and how did you become interested?

DRU: I started using FreeBSD in 1997. I went “cold turkey” by installing it on my only computer and learned how to do what I needed to do as I needed to do it. Once I was comfortable with FreeBSD, I ventured into learning how to use NetBSD and OpenBSD, and when PC-BSD came along, I switched to that as my main desktop system.

NAN: Describe your involvement with the BSD Certification Group.

DRU: I founded the BSD Certification Group to create a community-based and psychometrically valid certification exam for system administrators of BSD OSes. The group is composed of volunteers who have been involved in BSD for quite some time as educators, authors, and/or system administrators. We have worked hard to provide a globally affordable examination that provides real value to employers.

NAN: You’ve written several books, including BSD Hacks, The Best of FreeBSD Basics and The Definitive Guide to PC-BSD. What can readers expect to learn from the books?

NAN: Do you consider your books introductory or are they written for more experienced engineers?

DRU: These books are written in the style: “Now that you have BSD, did you know that you can do these cool things?” I’m a hands-on person and I like to know what I can do and to understand what I’m seeing when something I do acts differently than I expected it to.

The great thing about UNIX is that you can learn how to do something useful now, even if you have never seen a UNIX command line before. And, even if you’ve been around forever, there is always something you haven’t come across before or a cool new way to do something that you haven’t thought of before. So, these books can appeal to both the introductory user (the main target audience) as well as the advanced user (who will still pick up a trick or two before passing the book along to an introductory user).

NAN: Are you currently working on or planning any books or projects?

DRU: I do have a to-do list, book-wise. It’s interesting that I currently write the equivalent of three 300ish page books per year, but these are available for free online at doc.freenas.org  and wiki.pcbsd.org.

In addition, my current big project is the two-volume set for the FreeBSD Handbook, which will be a good 900 pages when it is complete. Once that project is finished, next in line is modernizing The Best of FreeBSD Basics for FreeBSD 10.x. Then, I’d like to write a second BSD Hacks-type book.

DRU: Since my expertise is in BSD, I’ll frame my answer from that perspective.
The first is creating usable frameworks for securing/sandboxing existing non-secure applications. FreeBSD is leading the development and research in this area in its Capsicum framework (see the article “Capsicum: Practical Capabilities for UNIX” on the University of Cambridge website).

The second is modern file systems that aren’t limited by the hardware restrictions that were around when most file systems were created. Examples include the OpenZFS storage platform and DragonFly BSD’s HAMMER file system.

NAN: Give us some background information. Where are you located? Where and what did you study?

DRU: I’m a recent transplant to Northwest Arkansas, having lived in Canada for many years. I went back to school in my early 30s to get a technical diploma in Networking and Telecommunications. I also earned the following certifications: MCSE, CNE, CCNA, CCSA, Security+, and probably others, which I have since forgotten.

NAN: How did you become interested in OSes and IT?

DRU: I was working in a dead-end position for a municipal department (low pay, very low glass ceiling) and wanted to expand my horizons. Many of our clients were being referred to a technical college for a networking program at a time when networking was a “hot” topic.

I had no idea what networking was, but figured it couldn’t be any worse than what I was doing, so I negotiated half days with my employer so I could attend classes. I quickly found that the course interested me and I seemed to be good at it.

Toward the end of the program, when I was researching employment opportunities, I noticed that the interesting and well-paying positions wanted UNIX experience. Having no idea what that was, and having no money as a poor student, I did an Internet search for “free UNIX.” The first hit was freebsd.org. I went to the website and my gut told me “this is it.” The rest, as they say, is history.